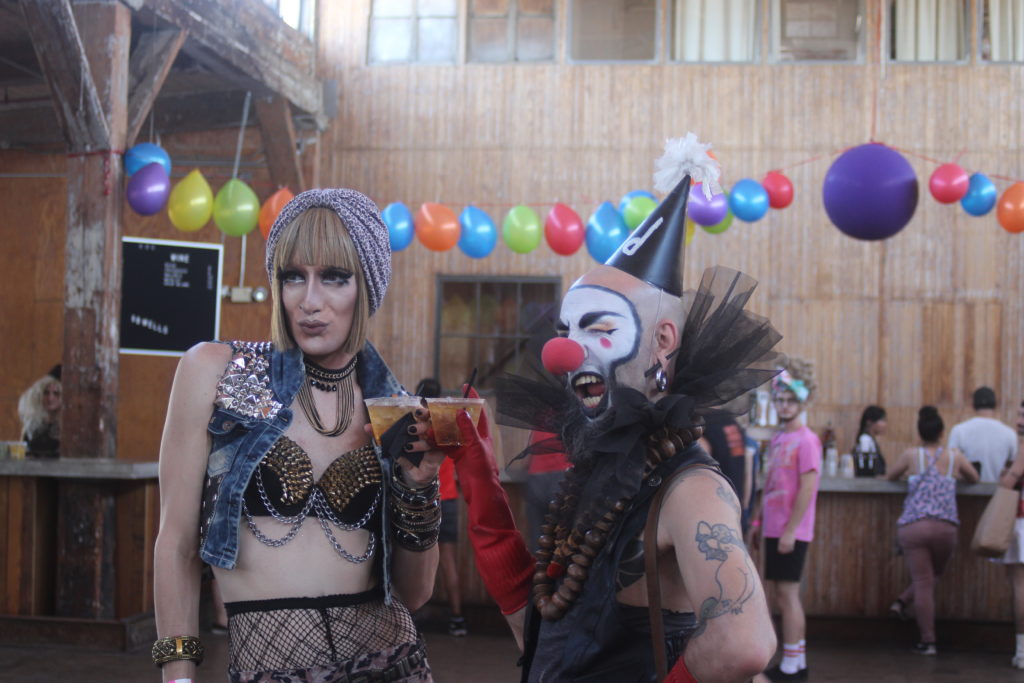 All photos by Iory Allison

I went to a marvelous party! It was billed as Bushwig and it took place at the Knockdown Center in the Maspeth neighborhood of Queens, NYC. Being at Bushwig was sortta like falling into a Toulouse Lautrec painting depicting the shenanigans at the Moulin Rouge. I loved the name Knockdown Center which sounded to me like the third round of a prize fight between the lunatic fringe and beyond the pale but it turned out to have a more prosaic etymology.

“The Knockdown Center features programming of diverse formats and media, aiming to create a radical cross-disciplinary environment.” This 50,000 square-foot building was the former Manhattan Door factory. It is named for the Knock-Down door frame that was invented here in 1956 by Samuel Sklar. The frame could be shipped in pieces or “knocked down.” The property is still owned by the Sklar family and is again a site for innovation. Having undergone an extensive renovation, the Knockdown Center now produces and hosts cultural events and exhibitions that respond to its unique architecture.

Bushwig is the annual festival of Drag, queer performance & music in New York City. It was founded in 2012 by Horrorchata (Matty Beats) & Babes Trust (Simon Leahy) to celebrate the queer drag and music now thriving in Brooklyn and the hinterlands of Maspeth. Its stated intention is to “serve you the ultimate poo-poo platter of cutting edge drag & music in the world”

Bushwig was inspired by the original drag festival, Wigstock, which took place in Tomkins Square Park in The East Village and was founded by the notorious Lady Bunny in 1984. According to Lady Bunny Wigstock began spontaneously after a group of drag queens (along with Wendy Wild and a couple of Fleshtones) became inebriated at the nearby Pyramid Club and decided to put on a show in the park. 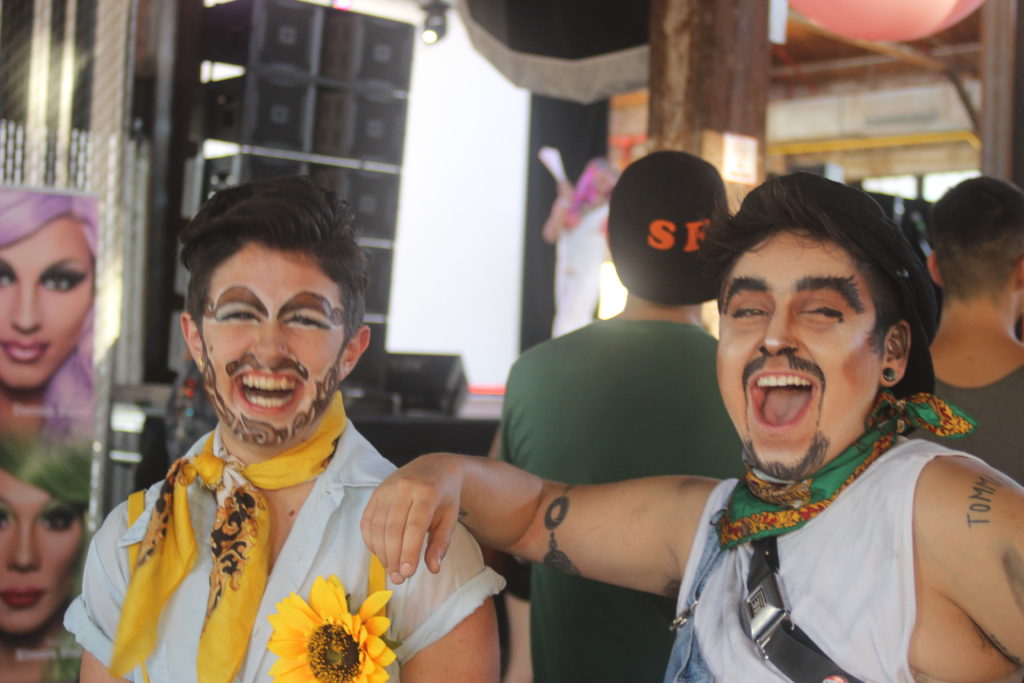 When I first arrived at Knockdown I fully intended to ask for names and email contacts so I could tell you what’s up but… after snapping numerous shots of the Princes above, the joint began to hop with streams of fantastic revelers pouring in from all sides. It was all that I could do to put my camera on speed burst and catch as much as I could of the kaleidoscope of humanity and otherworldly creatures twinkling on the razor’s edge of Bushwig. So play bill credits went by the wayside. This jolly couple, however, facilitated my original intention with a handy address card including all their pertinent info; so here we have Danny and Tommy, “Born to be Kings: Princes of the Universe” F B, @danyandtommy.

After Danny and Tommy your guess is as good as mine as to the identity of the characters in question and since none had any ambition of “true Identity” I think I will just make it all up based on what their “look” told me. 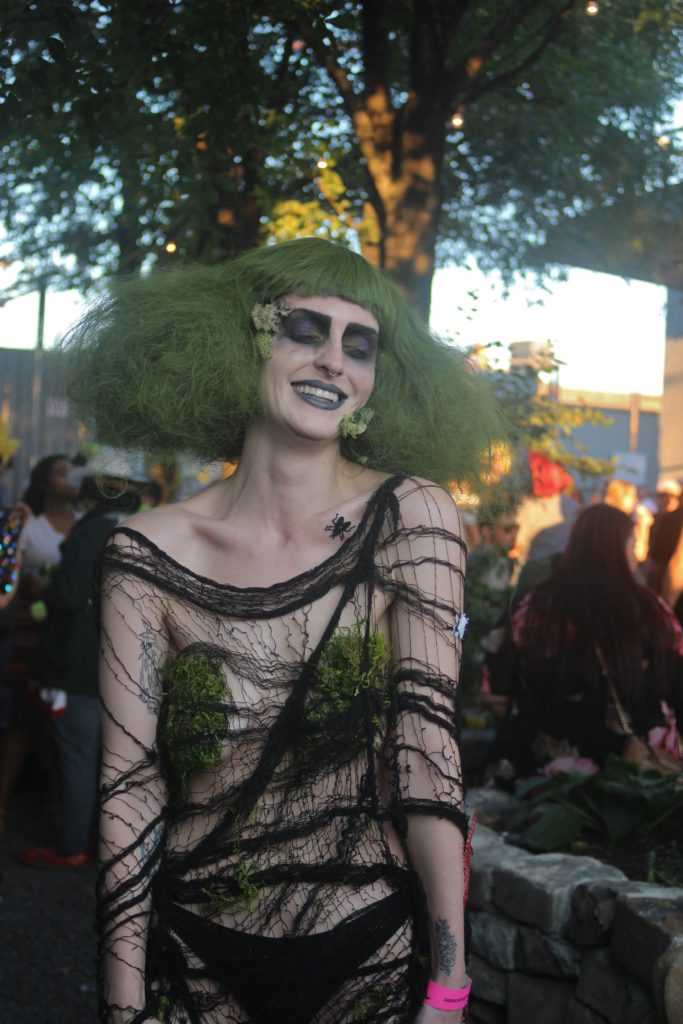 See what I mean about a Toulouse Lautrec painting? As you can see all too well, this cabaret creature is caught in a web of her own making. 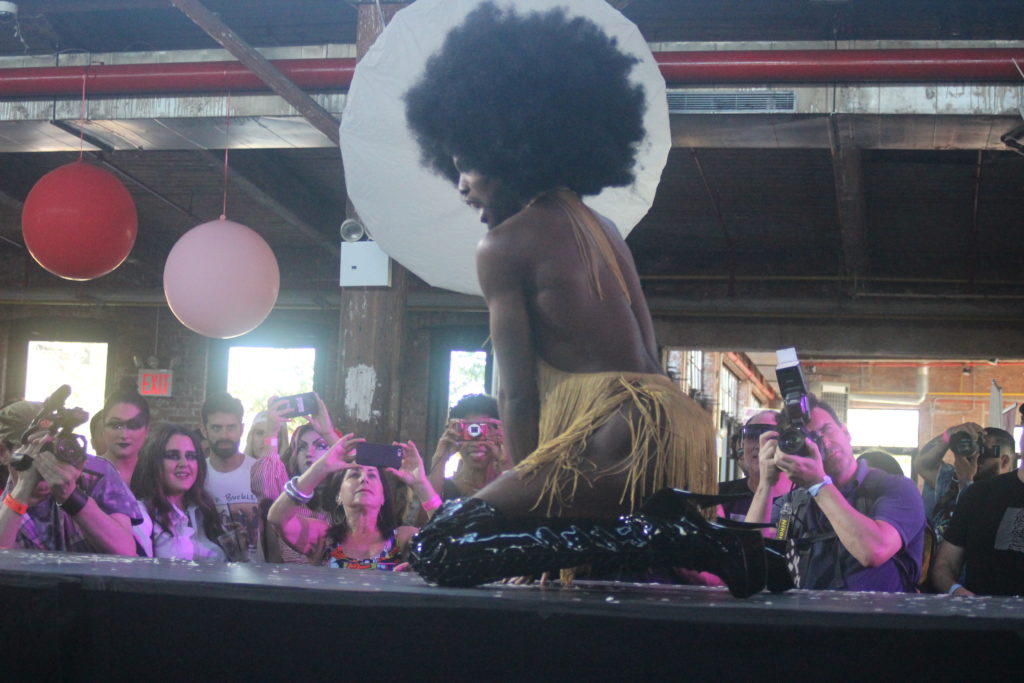 Here we have the man with big hair vamping on the runway and causing the crowd of rapacious shutterbugs to snap madly, justifying his moon halo which marks him as a celestial diva! 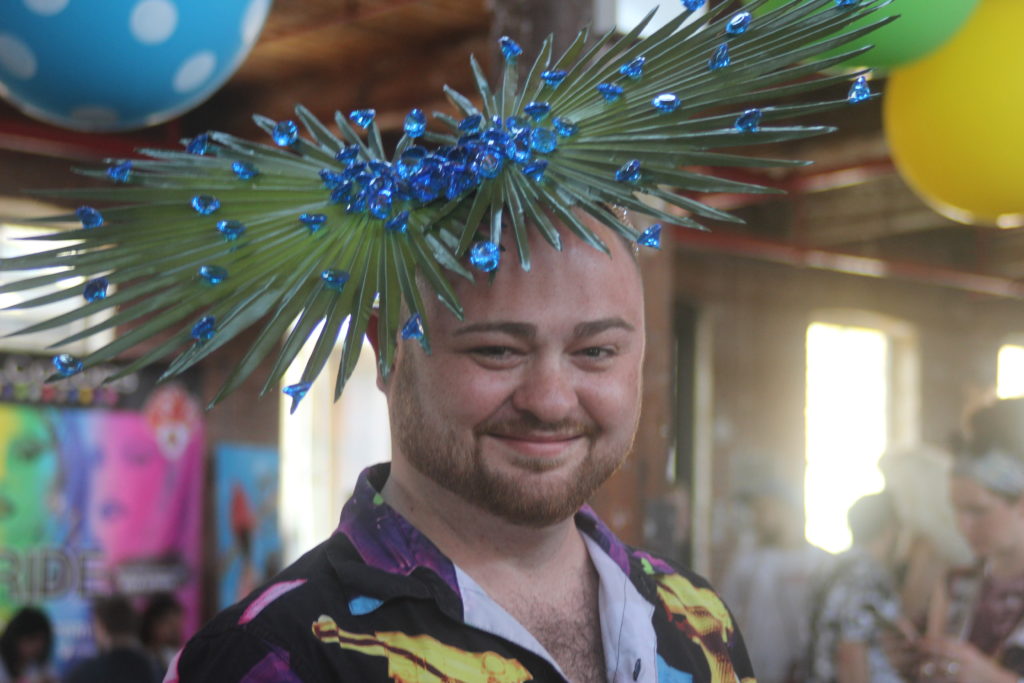 I absolutely adore this cute guy with his bejeweled palm frond perched at such a rakish angle. 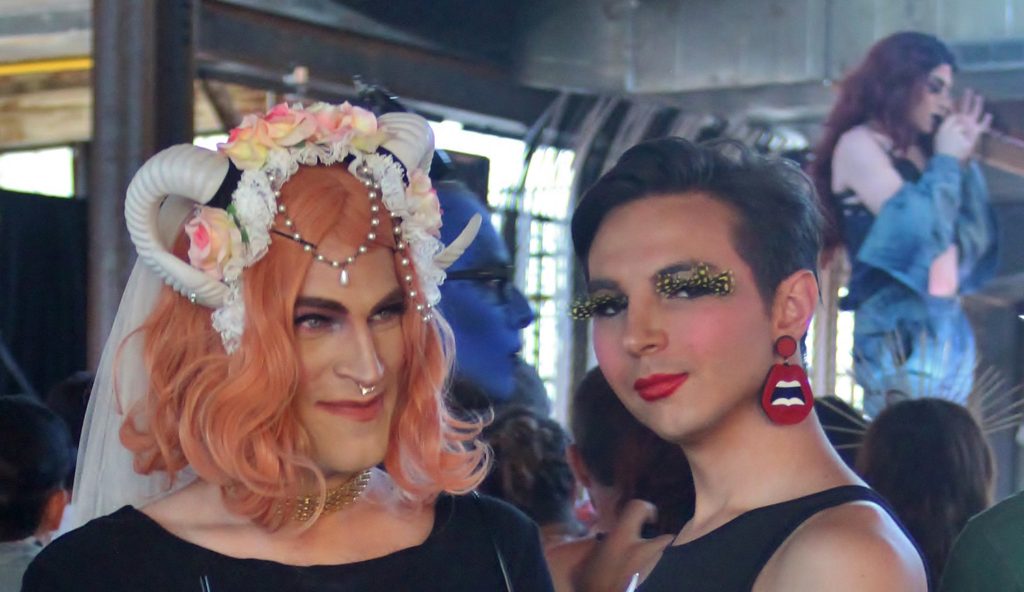 As far as I’m concerned this is a perfect moment of Bushwig! The pagan bride and Lips McGrew pause from admiring the moody performer on stage for an alluring moment with my camera. 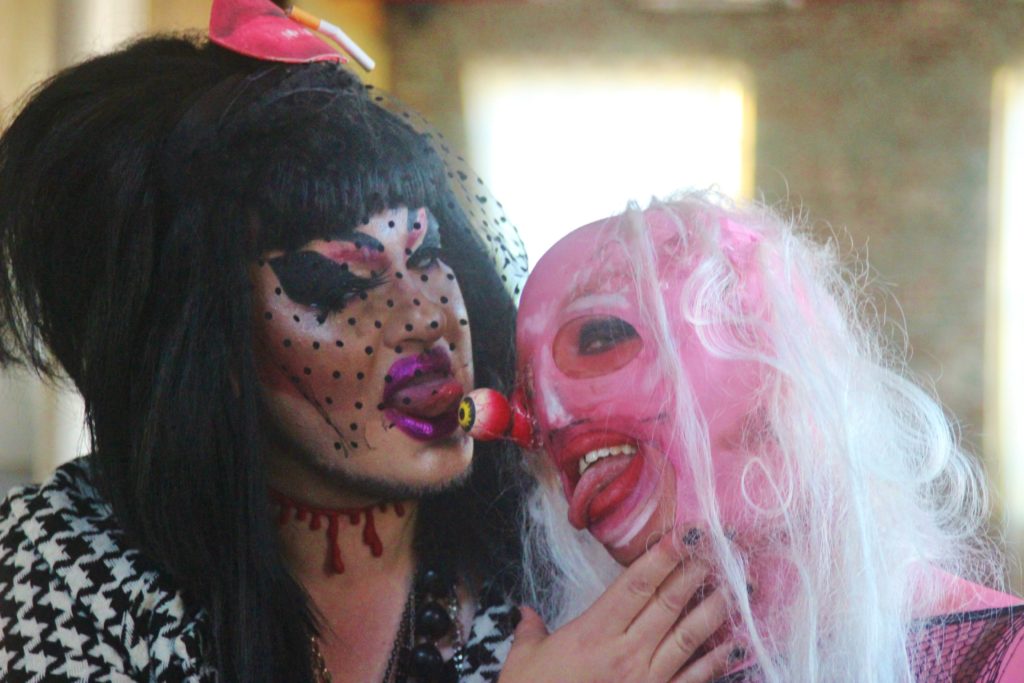 Oh Yes, there was ghastly horror represented too. These two tongue wagglers were perched next to me on bar stools in the exclusive VIP “Ready Room” At first sight of these arresting creatures, I took a big swig of my Manhattan and asked the bartender to get them one on me. After imbibing a while and chatting back and forth, they proceeded to launch into this lip smacking routine and whereas they gave me goose bumps the camera ate them up. 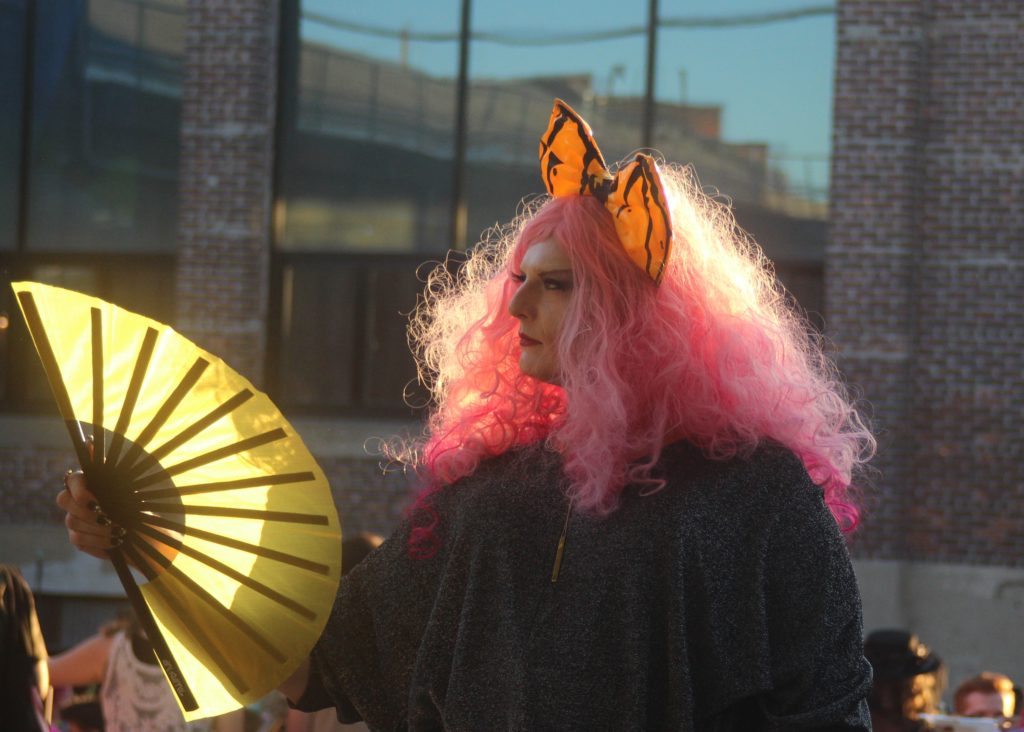 Don’cha just love the expressive qualities of a fan? Photography is all about the moment and when natural light lends a helping hand interesting effects can occur. Here we are in one of the outdoor courtyard spaces of Knockdown when the sun was setting and the party was beginning to sizzle. 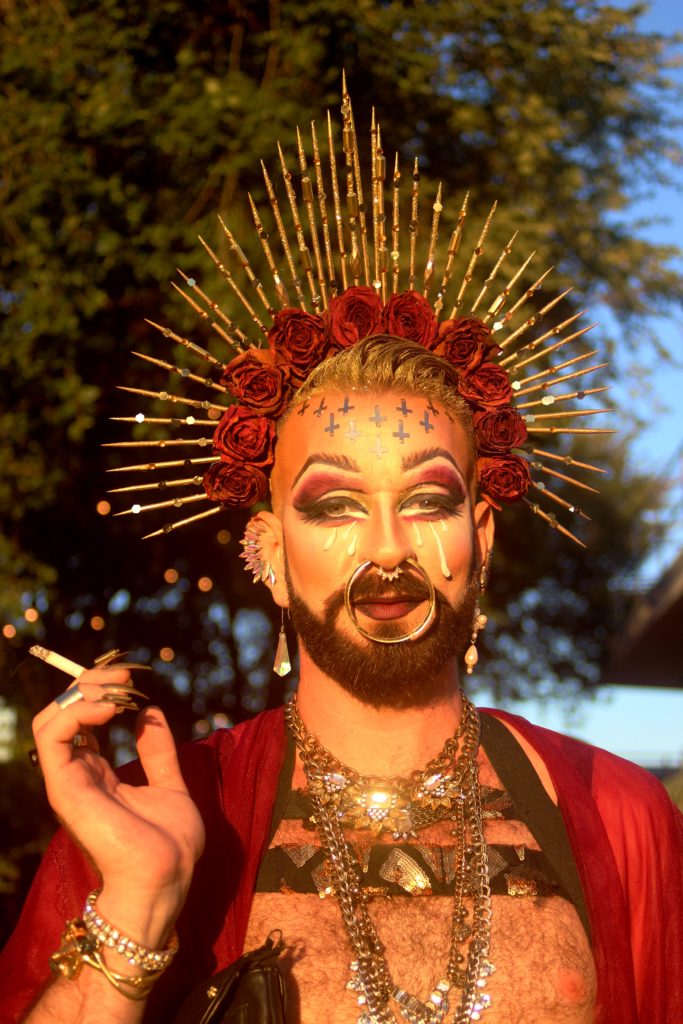 And then there are moments when the sun kisses the subject, illuminating the intricacies of magnificence. What else can I say except; when was the last time you saw a divine revelation smoking a cigarette? 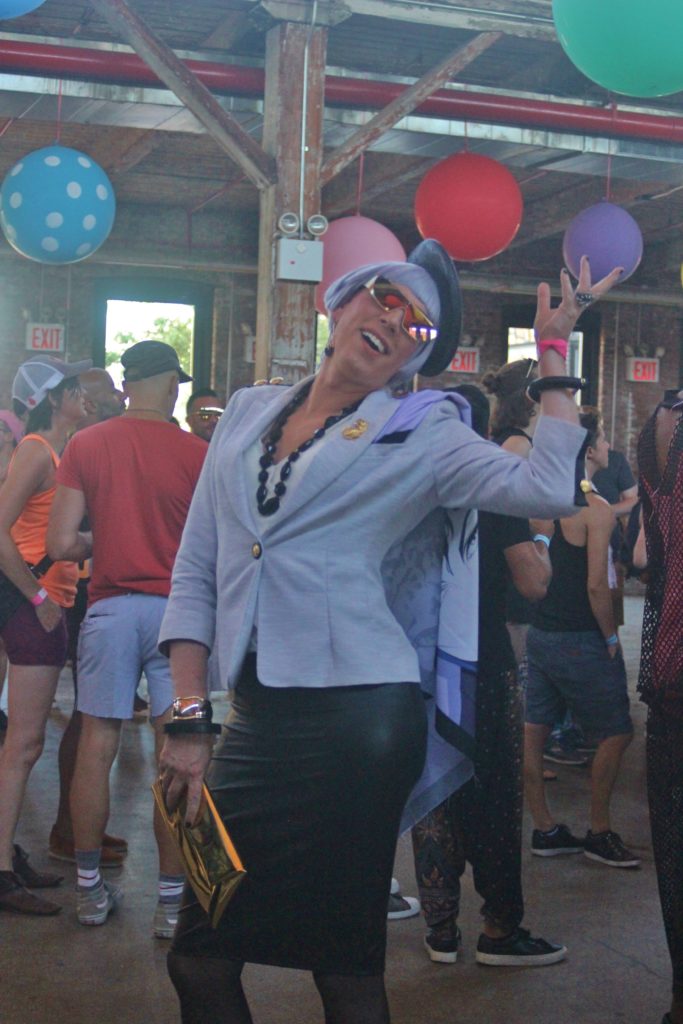 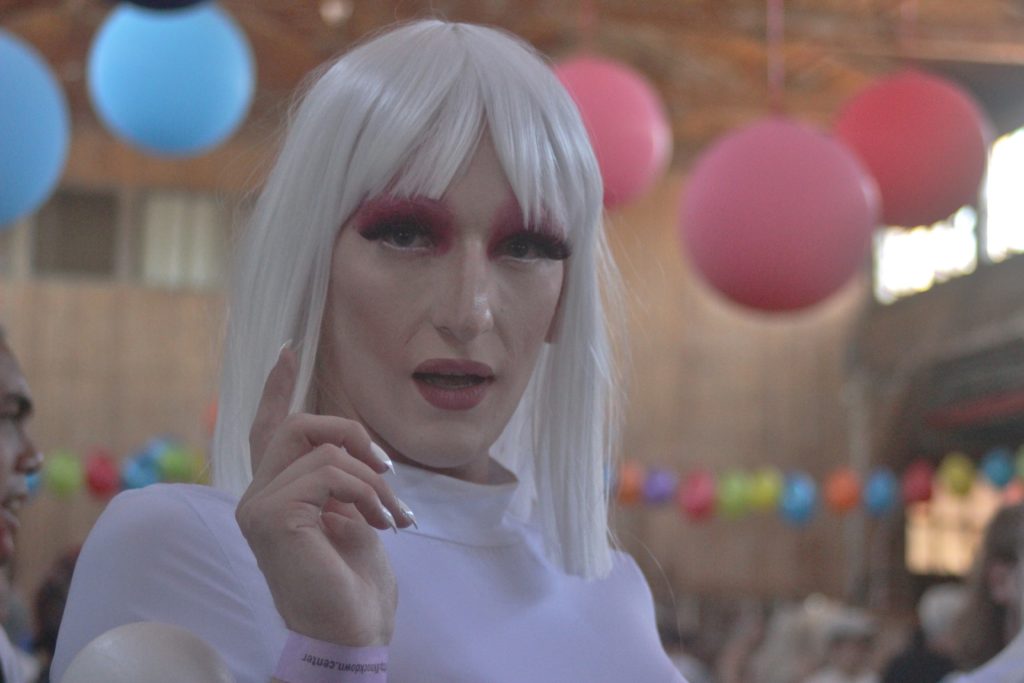 There are purists among us who shine like stars. 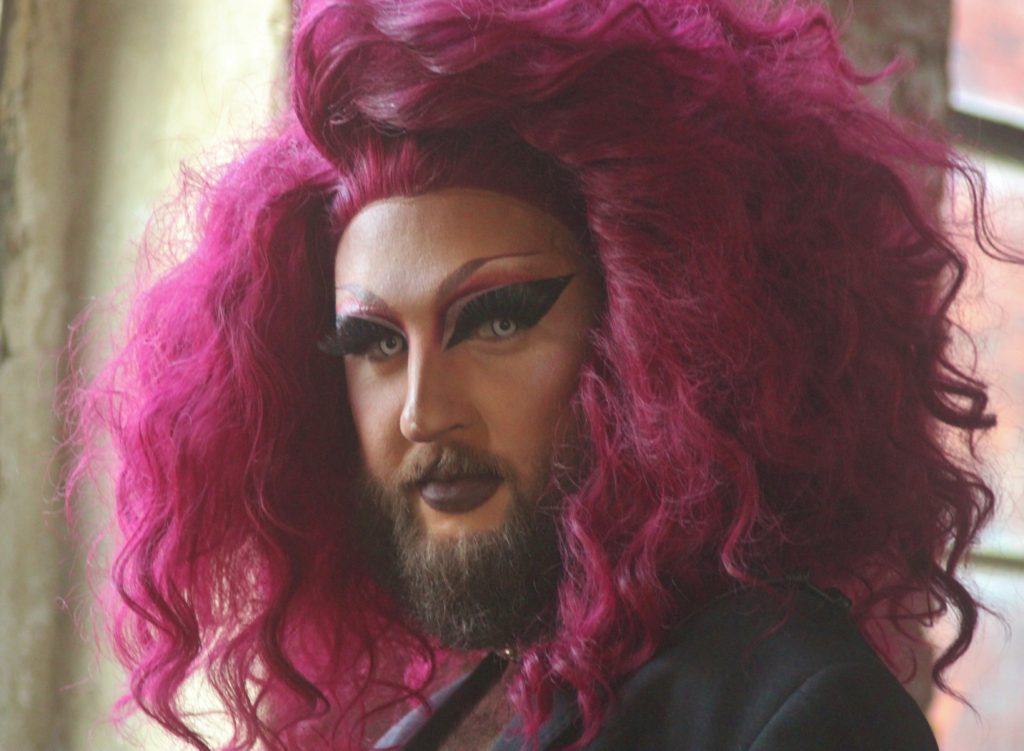 The Mesmerist commands all our attention. 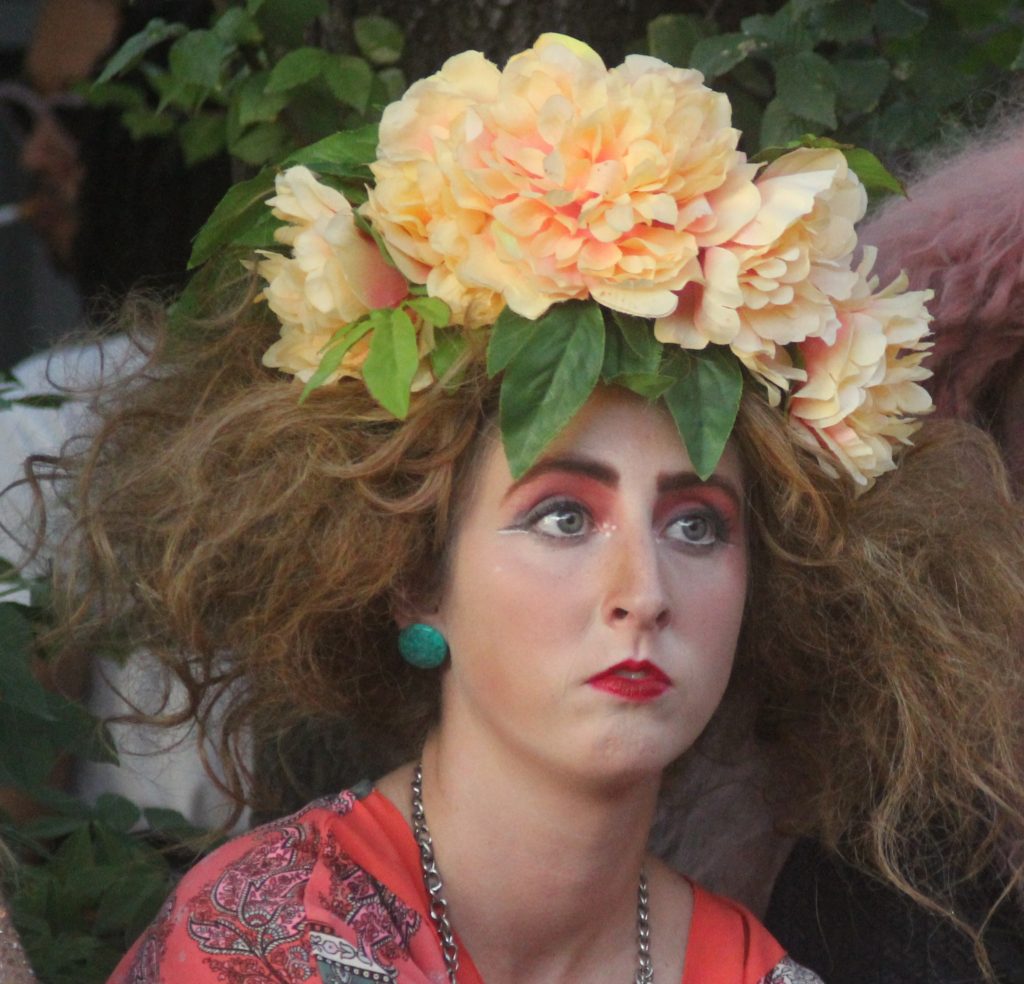 Summer beauty in full bloom is oblivious to the coming autumn. Her gaze reaches beyond the present into places of distant memory. 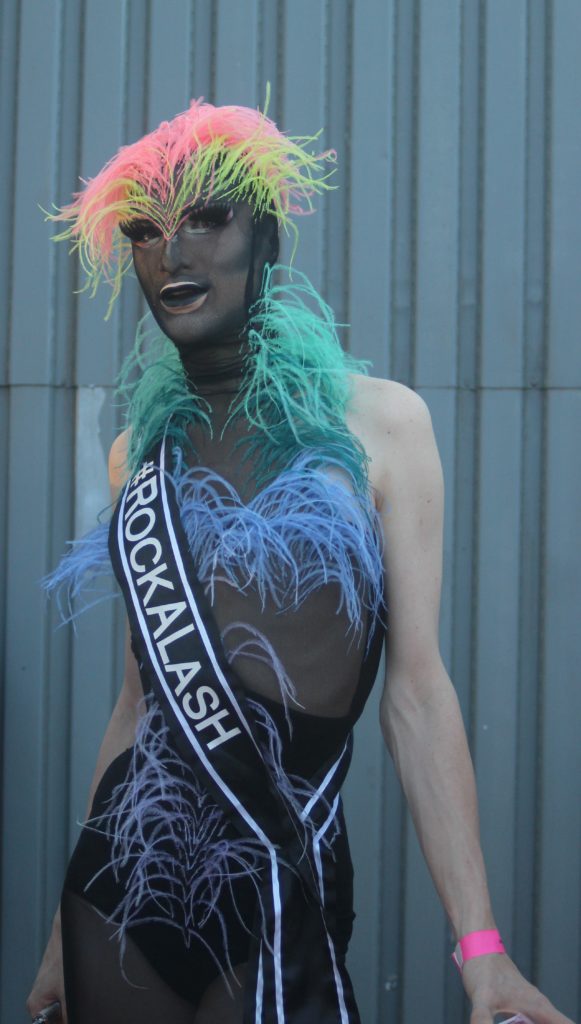 This alarming creature looked to me something between a praying mantis and a late night shadow. It turns out #Rockalash, the artificial eyelash company, was a sponsor of Bushwig. 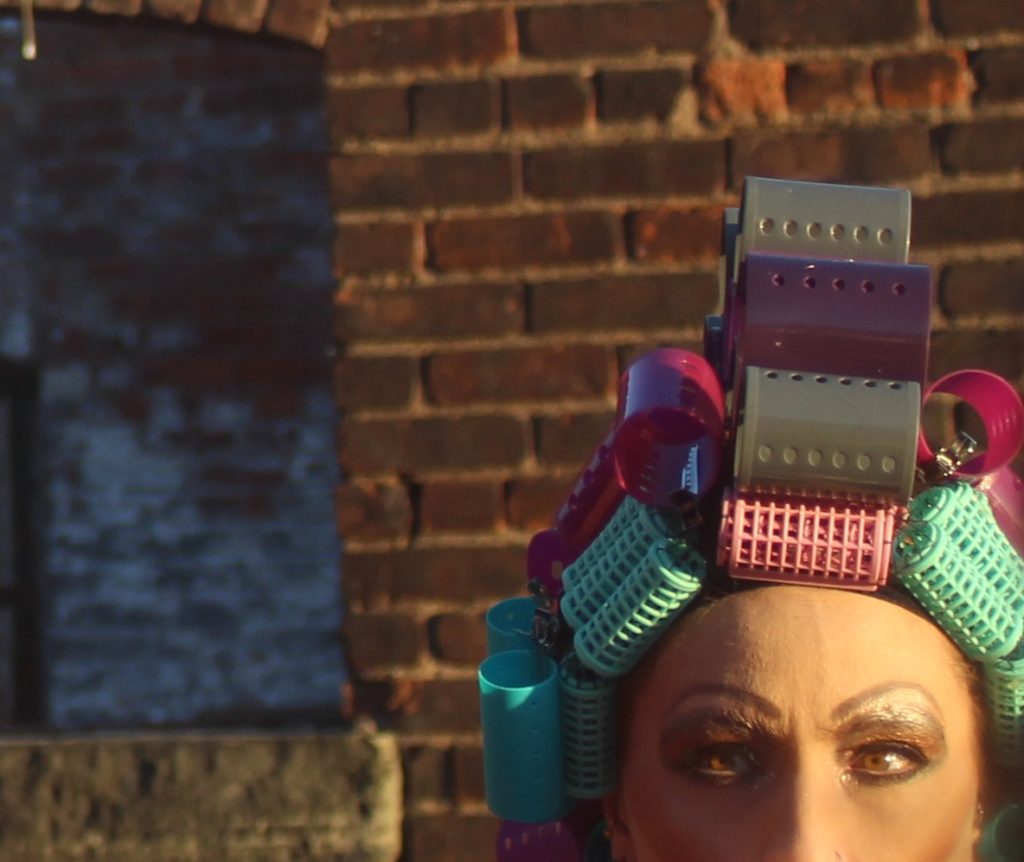 I doubt that this tightly curled girl was advertising anything except the general existential question: “Wha’da Fuck?!