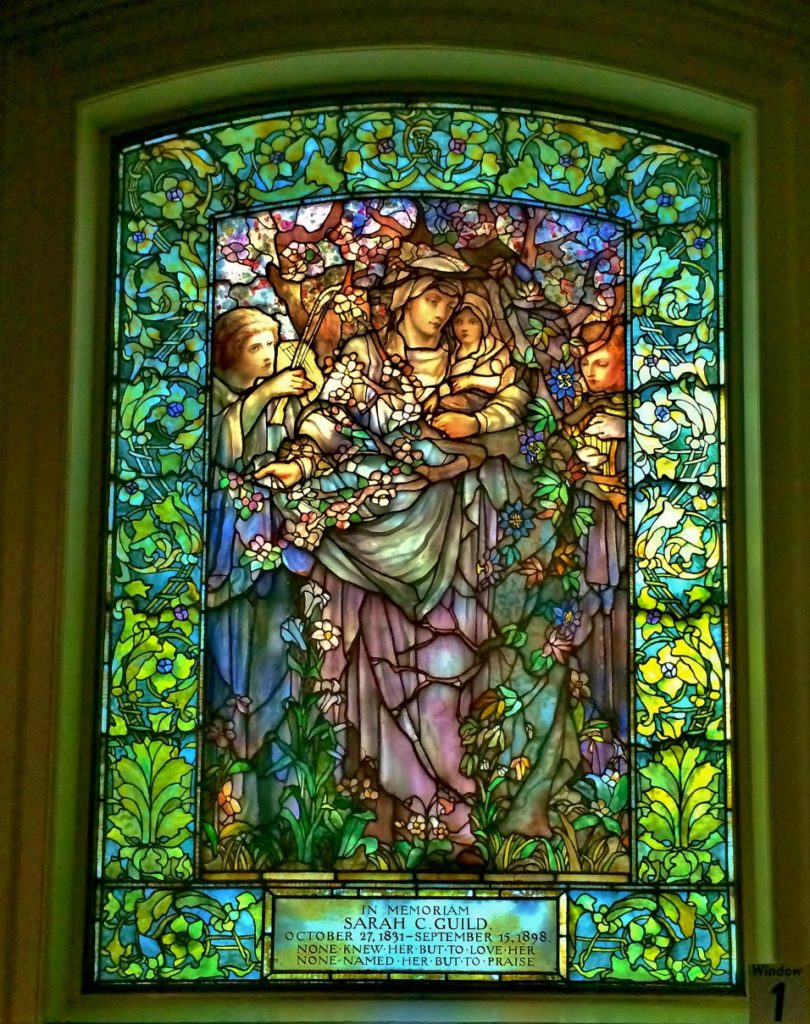 Except where noted all Photos are by Iory Allison

MADONNA OF THE FLOWERS

In this window, the central female figure or Madonna, tenderly embraces her child. But here she is intended to be more than the character of the biblical Mary; she also symbolizes the universal qualities of the feminine and motherhood. At her feet a host of flowers spring to life with abundance. By the Madonna’s right foot is a blossoming stalk of a pure white lily, symbolizing both the annunciation of Archangel Gabriel and the resurrection of Christ. On the Madonna’s left, entwined around a tree is a blue passionflower vine with all its references to the passion of Christ crucified. The tree on which the passionflower grows is itself in blossom, supporting and protecting the Madonna and her child, symbolizing the resilience and eternal aspect of spiritual awareness. Two attendants flank the central figures, they are playing a violin and lyre and they symbolize the harmony of universal bliss.

The stained glass windows of the Arlington Street, Unitarian Universalist, Church in Boston were designed, made and installed over a period of 31 years from 1899 to 1930 by the Tiffany Glass Studios of New York. There are 14 main “story” windows and two of ornamental design. Each window employs richly colored iridescent glass, painted / enameled glass and layered opalescent glass using “jewels” to further enliven the borders. The overall effect of the highly chromatic windows in the all white neo-classical interior architecture is dramatically sumptuous. 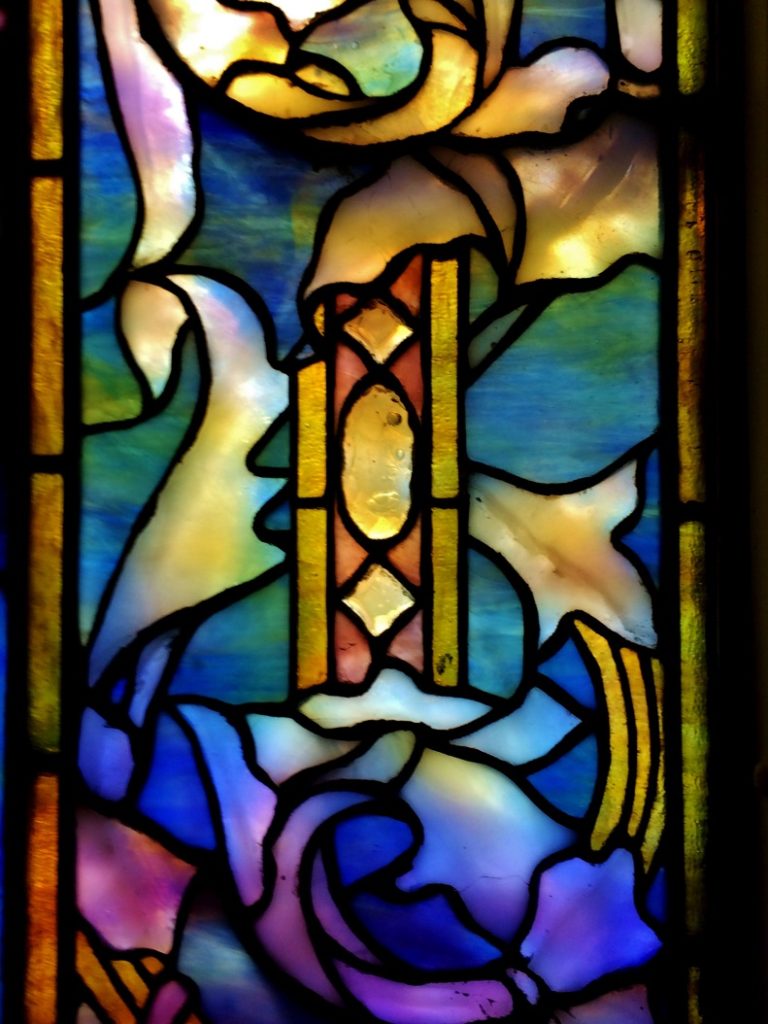 The Arlington Street Church was the first public building built in Boston’s Back Bay, completed and dedicated in 1861.The building was designed by Boston architect, Arthur Gilman. The exterior is inspired by the famous church of St. Martin in the Fields in London.

The interior is divided into a nave with two side aisles by a range of twenty-five foot high Corinthian columns set on plinths elevating them to the height of the tops of the pews. The pews are made from chestnut wood with black walnut rails with silver/gray brocaded upholstery. The spectacular stained glass windows and the red carpet running down the central aisle are in glorious color contrast to the rest of the pristine white interior. A barrel vaulted ceiling rises 68 feet to the apex of its five arches and is decorated with foliated rosettes. 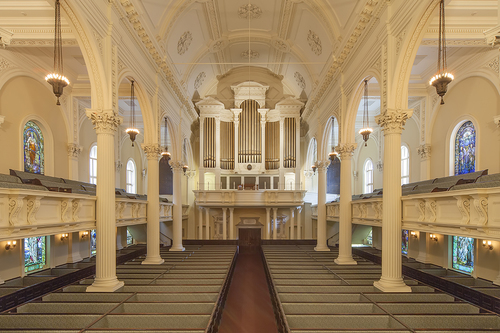 Photo from the website of The Boston Organ Studio

Each window is dedicated to the memory of various members of the parish who were also prominent Bostonians of their time. The iconography of the windows reference Christian biblical stories and a variety of spiritual concepts. 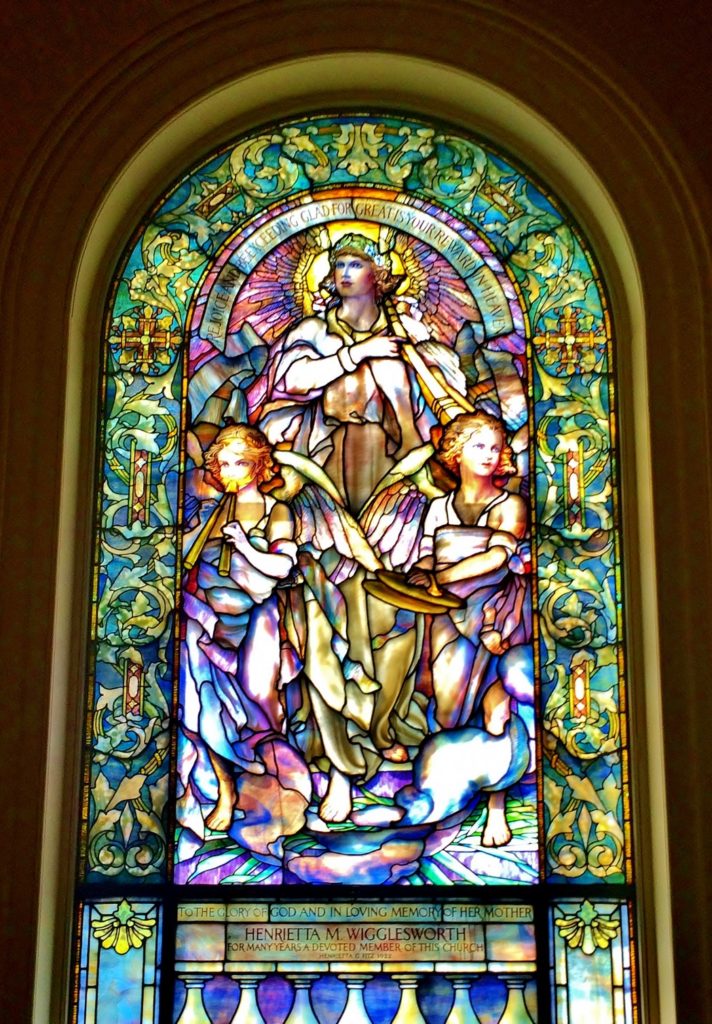 The angel in the center has a lyre resting on her shoulder and the two flanking cherubs play different instruments. The cherub on the left plays the ancient Greek instrument, a double aulos, which was instrument like a modern oboe. It was held in place by a leather strap. The aulos had a shrill, piercing tone  like a bagpipe and therefore had a compelling and strong sound.  The cherub on the right plays the cymbals.

The message here is a jubilant promise of the afterlife, the window is inscribed on the arch above the group, “Rejoice and be exceedingly glad for great is your reward in Heaven.” I would say my reward is seeing this astoundingly beautiful work of art right here and now. The wings of the cherubs have sculpted, three dimensional passages of iridescent glass while the face is enameled. 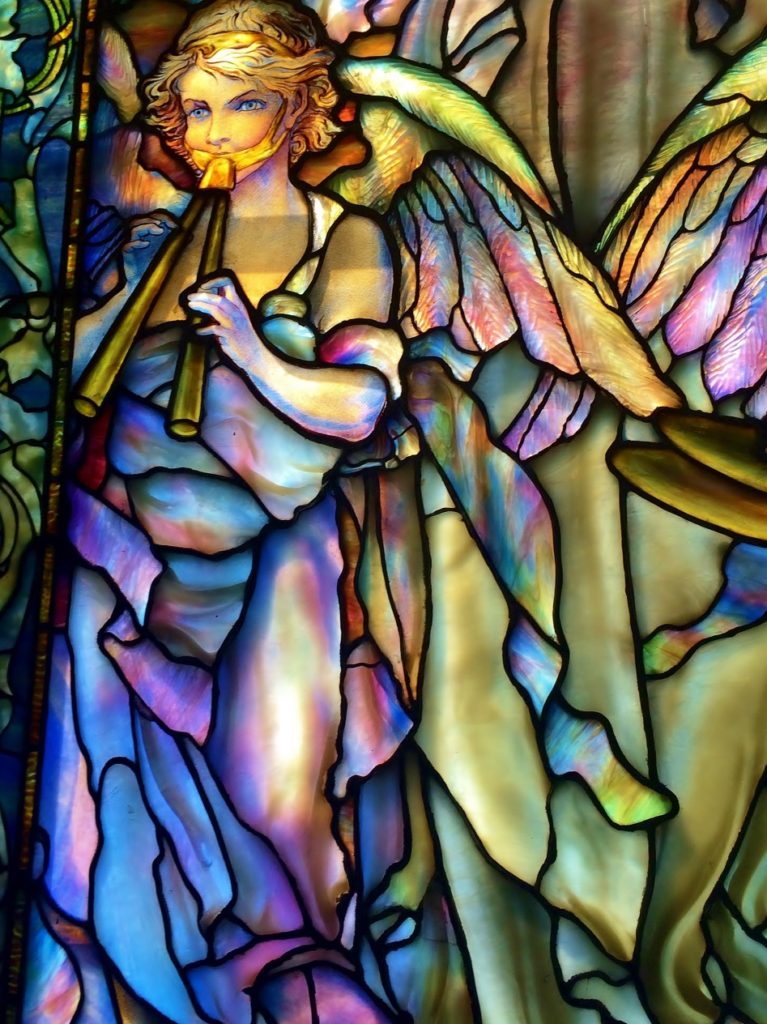 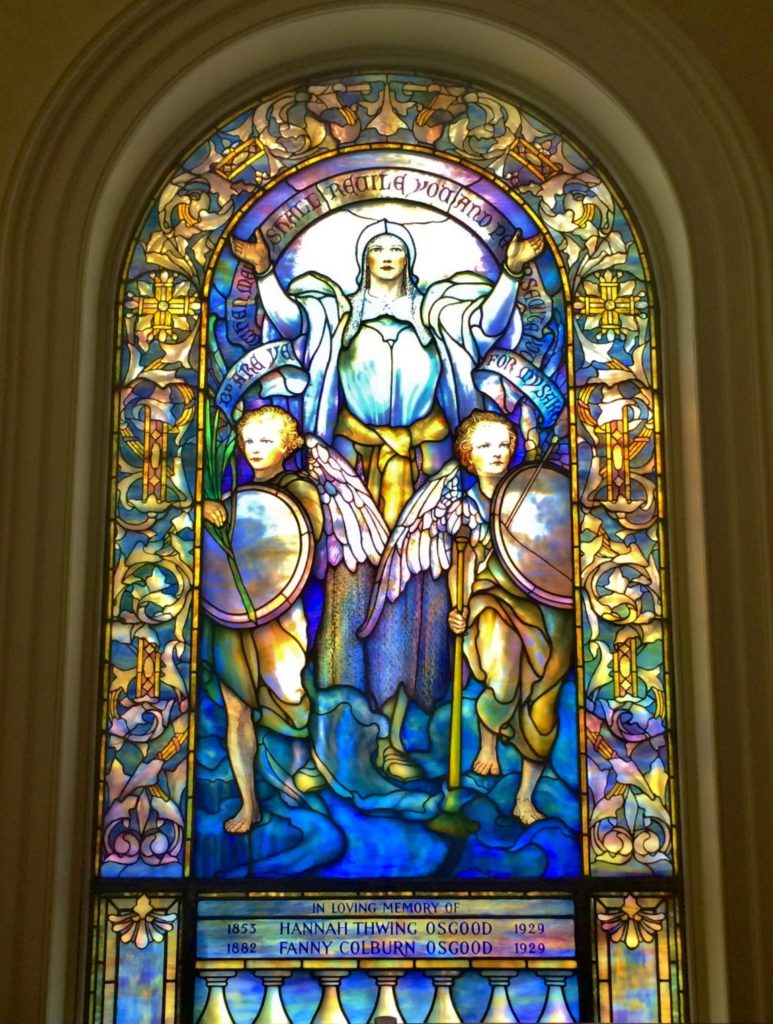 This window is entitled, “Blessed are ye when men shall revile you and persecute you.” At face value, this is not a sentiment that I share, nor am I fond of the bellicose weapons and armor. I shy away from the depiction of philosophic or religious beliefs with knights or warriors smacking of  – “onward Christian Soldiers.”  I believe that true invulnerability against the forces of evil is to learn to deflect such competitive discord, such as a master of Judo will deflect the force of attack by turning it back on itself. That said, I have to admit to an irresistible fascination for the allure of body armor and helmets because of the stylized and enhancing decorative aspects of polished steel following the contours of the body. In this case, the central angel wears a long chain mail skirt which drapes beneath her breast plate. I suspect this representation is accomplished by painting the design on with enamels on the back side of the glass. 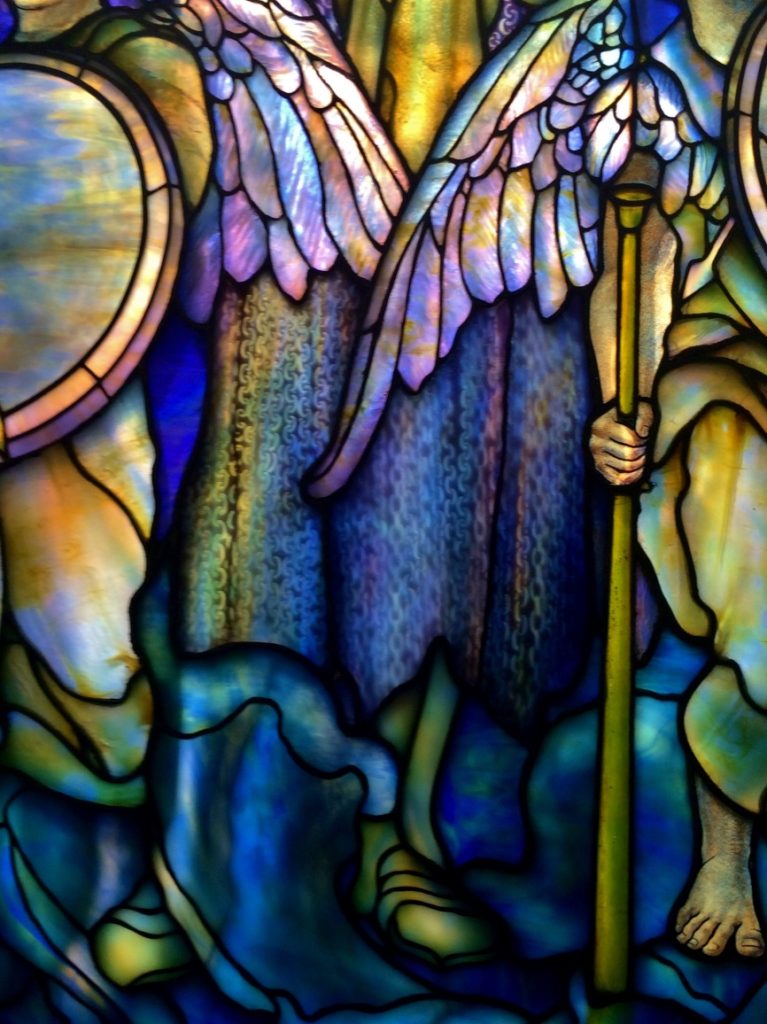 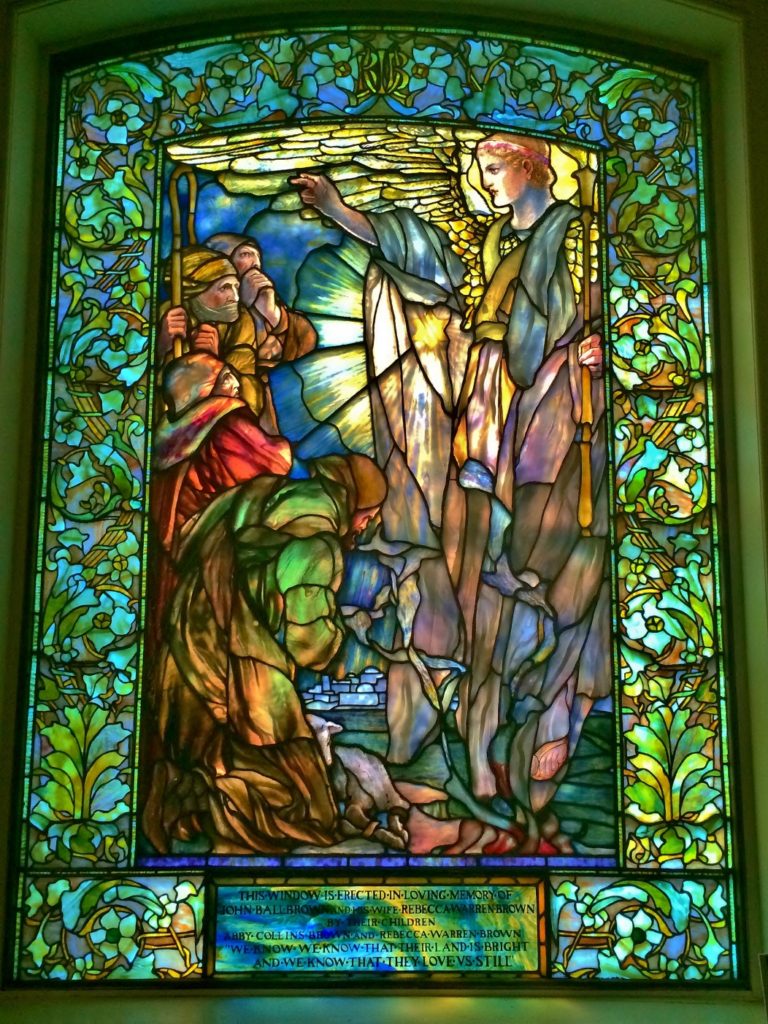 This window depicts an angel telling a group of shepherds of the birth of Jesus in Bethlehem. Now here is a theme I can thoroughly admire, revelation. I believe that the alignments of the physical structures of our world are a constant “revelation” and within that miraculous discovery is the great joy of true love.

Whereas I no longer identify as a Christian, I do believe in the divinity of the universe and in its infinite expansive evolution there is collective super intelligence, design and harmony. This divine presence can be seen and felt in the “murmuration” of fast flying birds that, in concert and rapid movement, swerve and divide, reunite and spin off again creating patterns of flight that are seemingly gone before they form. Never once, in a host of thousands the birds, will a single individual collide with another. This is an example of collective intelligence and  is only one  infinitesimal example of the design for living that animates even the spiraling “arms” of our own galaxy, “The Milky Way.”   These are miracles, not the magician’s sleight of hand turning wine into water. It is cooperation not competition that powers evolution!

“These beautiful starlings were filmed in Israel – thousands of starlings fly in a massive murmuration in the skies above Rahat,” Zoo. (Sorry about the pop-ups you may have to endure or click out of, but in this case these distractions are worth tolerating because the clip is an amazing revelation. )

The next three windows illustrate three of the “beatitudes,” quotes from the book of Mathew in the New Testament of the Christian Bible. The beatitudes are from the Sermon on the Mount that was preached by Jesus and is a probable compilation of his overall teachings.

The astounding beauty of the colored glass and the extreme quality of the craftsmanship paired with the innovative technology of the Tiffany Glass Studios are revelations in themselves, ever reminding us of the truth in beauty.  The Peacemakers, The Meek and The Merciful, in my mind, embody wise individuals who can deflect and sidestep negativity in order to preserve harmony. 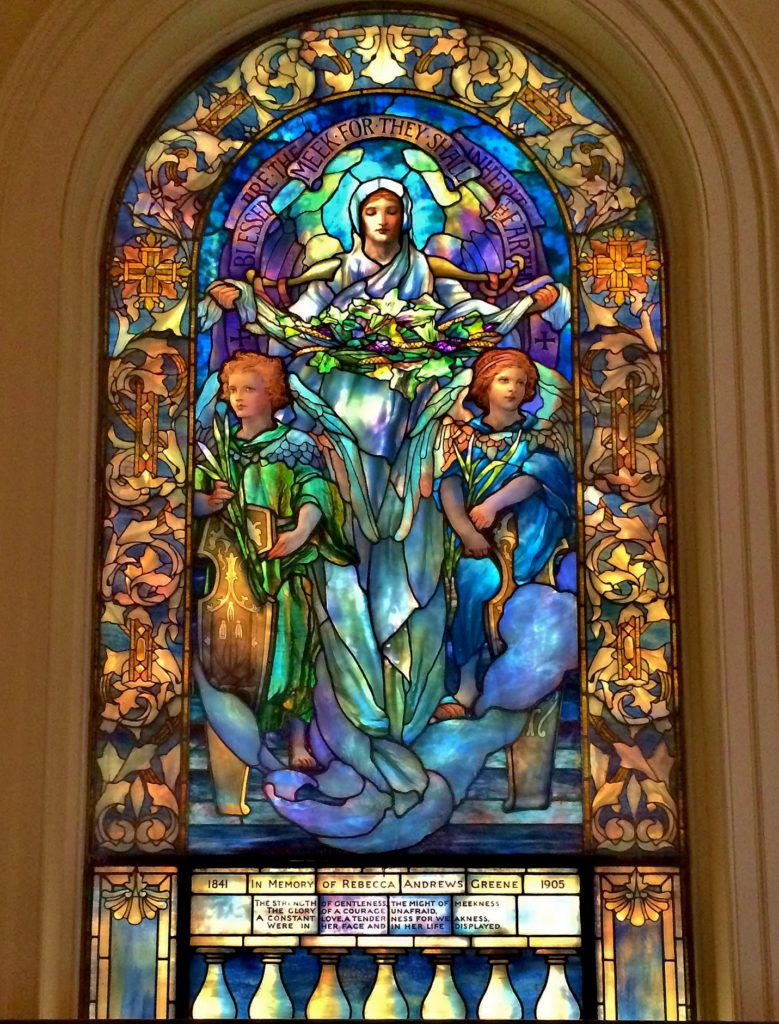 “Blessed are the peacemakers for they shall be called the children of God.” 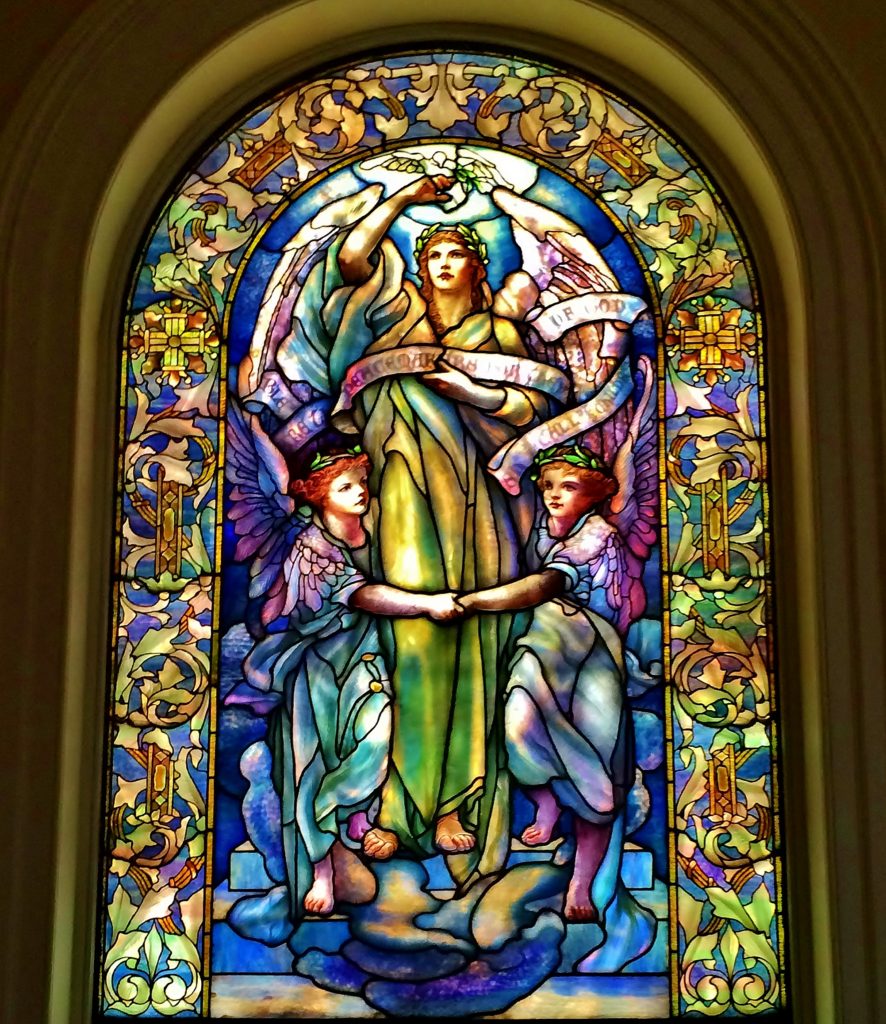 Blessed are the meek for they shall inherit the earth.” 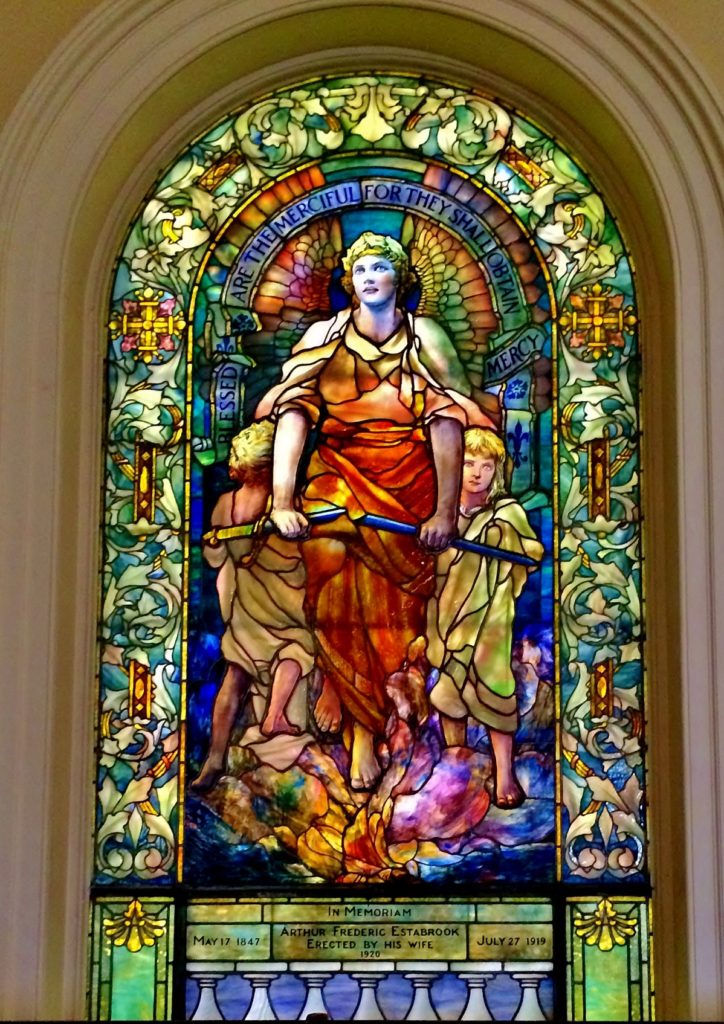 “Blessed are the merciful for they shall obtain mercy.”