The wild swans peacefully paddle away The wild swans at Broadmoor have a tasty lunch of duck weed floating on the surface of the marsh. They skim the tiny chartreuse leaves off the dark waters making greedy, rapid-fire munching sounds.

The Broadmoor Nature Center at 280 Elliot St. (Route 16) South Natick is the site of several old farms on the banks of Indian Brook where it meets the larger Charles River. It was originally a territory of the local Native American tribes who had seasonal  encampments there for centuries. It later became one of the sites of Reverend John Eliot’s “Praying Indian Towns.” Thomas Sawin built a gristmill at the site in 1690, the mill  foundations  and  several stone dams are still to be found along Indian Brook. Broadmoor has a couple of shallow mill ponds and an abundance of wet lands that support a variety of wild life from beavers to wild swans along with a host of other birds – one of my favorites is the Great Blue Heron.

Rising above and encircling the fresh water marshes are ridges of wooded land with formidable old trees that shade root-woven paths leading to open fields and views across the marshes. Picturesque rock ledges blanketed with gray-blue lichen and emerald green moss punctuate the woods. Here and there are placed welcoming benches where one can contemplate the serene landscape and listen to a host of songbirds 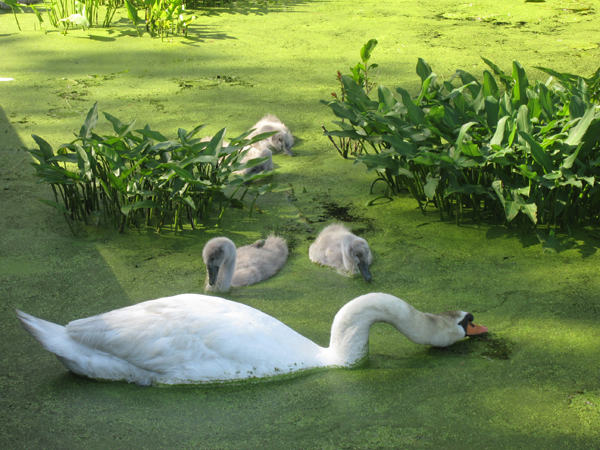 The baby swans are technically called Cygnets from the Latin word Cygnus, meaning swan. But I call them swanlings. They are carefully guided by Mom and Dad through the maze of channels between the water hyacinths and cat-tail reeds in the marsh formed by flooded lowlands bordering the Charles River. 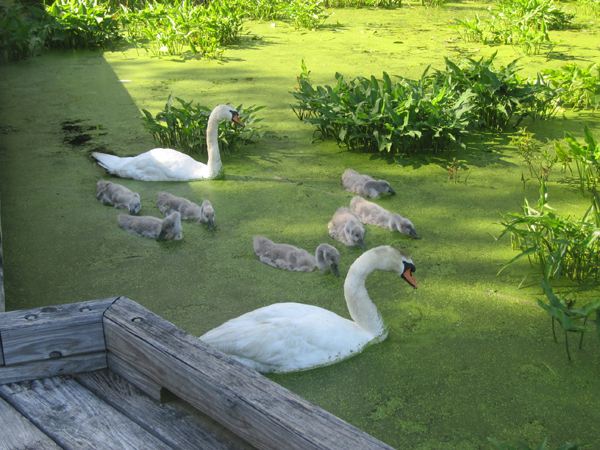 Mr. Swan, in the lead, interrupts his munching and cocks a watchful eye at me as his dame lifts her head high in reproach at my presumptuous intrusion.  I eagerly snap pictures from the boardwalk meandering through the green marsh.

Mom and the swanlings retire to their floating nest for grooming