The bright morning sun washes over the Old Inn at Grafton. 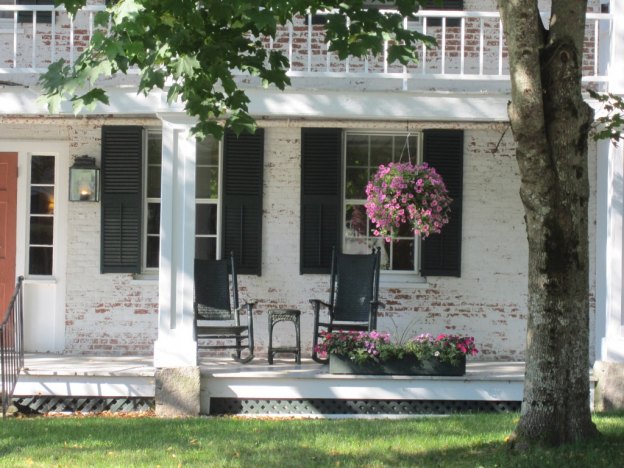 The comfy rockers wait patiently  for the guests to wake up as robins sing of a new day.

The old Inn at Grafton Vermont is a magical hostelry that my husband, Leo and I have visited for the last thirty five years and it grows more beloved in our hearts as time goes by. This year we visited in July to take advantage of the then promotion of three days for $333.00 including full breakfast and that ain’t hay. It’s a soup to nuts breakfast with table seating, linen cloths and napkins, excellent waiter service and great grub!

The Inn is the center of Grafton village both literally and figuratively and it has been in continuous operation since 1801. In 1964 a foundation was formed by long time summer residents Dean Mathey and members of his family, especially a generous endowment from his Aunt Polly, God bless them all. As the project developed over the years, the foundation restored the original inn and a great many of the homes and civic structures of the town. The influence of the Windham foundation has set a high standard of traditional New England village aesthetic throughout Grafton which now appears as a pristine and peaceful community of exceptional beauty.

The main inn was comfortably appointed in the mid-sixties by Elizabeth and Mathew Hall – 1st cousins to Dean Mathey. The Halls were largely responsible for purchasing everything from the antique furnishing to the linens for the rooms. As the project evolved several cottages across the street and a sprinkling of houses around the Village were added to extend the capacity of the Inn. The amenities of the guest rooms include an abundance of creature comforts that a discerning traveler hopes for in a country inn. All the guest rooms have comfy beds with crisp linen, spacious tiled bathrooms with fluffy towels, traditional wall-papers, colorful hooked and or braided rugs, charming art work referencing times gone by and most impressively handsome English and American antique furniture of rare quality and quiet taste.

The numerous public rooms are similarly furnished and include: formal and casual dining rooms for dinner and breakfast respectively, sitting rooms with toasty glowing fireplaces in season, several cozy libraries tucked into quiet corners, a conference room paneled in weathered barn wood with a massive fireplace, and a labyrinth of intriguing hallways also furnished with handsome antiques made of old polished wood.  The art works around the whole establishment include, but not exclusively, an amazing collection of authentic eighteenth and early nineteenth century cartoons by Romney, Cruikshank and the likes, parodying the foibles of humanity with a merciless bite along with the buffoonery of Dr. Syntax on his heedless journeys off the cliff of dignity into the pit of prat-falls and disaster. The Phelps barn is attached to the main inn by a covered walkway. Here you can enjoy more casual meals and good drinks with occasional live entertainment – see website link below for schedule. The cozy wooden interior is constructed with massive old hand-hewn beams that support the open hay loft with its soaring peaked roof. The first floor great room is anchored at one end by a generous fireplace surrounded with comfortable sofas and a collection of antique English pub chairs and tables that silently tell the long story of cheerful hospitality revealed in the grain of their well-worn wood. At one end of the barn an open stair leads up to a pub with its own fire place and bar tucked beneath the peaked roof. A special treat for me and Leo is wading in the two mountain streams, both branches of the Saxons River that rap around the outskirts of Grafton village. We strap on our rubber soled sandals and carefully plunge into the swift and bracing water as it tumbles and gurgles over the rock strewn bed of these two streams. For me, the first delight is the miracle of the water itself. Clean, clear and constant, it flows with a strong sensual force encompassing all in its path with a formless, yielding fluidity that drowns the many stones and boulders collected along its twisting channel. The two streams meander through field and forest mostly hidden behind a veil of foliage.

In this world everything is in perfect arrangement as the forces of nature sort the component parts of water, stone, sand, weeds, reeds and trees into a display of astounding beauty. In constant flux, the water-ways flow on for eons an unstoppable force – always there but never in one place – allowing me to recognize the omnipresent force of constant change as the structure of the universe. Like the water flowing around the stones so do we, particles of creation, flow through time and space following the unraveling spiral of our galaxy. 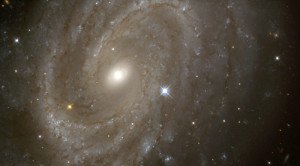