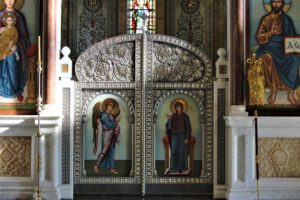 Last November, 2018, T 2 H 2, The Two Happy Husbands, Leo and Iory were in London stopping at The Rembrandt Hotel in ever so chic Knightsbridge across the Cromwell Road from the V & A. One afternoon, on a rambling stroll of that neighborhood we came across the charming Russian Orthodox Cathedral of The Dormination of the Mother of God and All Saints. Dormination is a R O, term comparable to the “assumption” in the western church referring to the passing of Mary from earthly life.  One of the charms of this small cathedral is that it is in a residential neighborhood nestled beside a mysterious private park of considerable size that is jealously guarded behind high iron fences with tall trees softening the surrounding urban formality. The church is accessed by a little cul-de-sac off Ennismore Gardens, South Kensington.  This creates a dignified progress towards the west front entrance where a 120-foot campanile stands proud, punctuating the architecture. This architectural ensemble closely reproduces the facade of The Basilica of San Zeno in Verona and as a Lombardy style church it is an unusual sight in Anglican London. 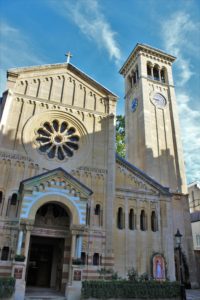 The original denomination of this parish was indeed Anglican and that church was also dedicated to and known as All Saints, Kensington. But in 1955 that parish was adjudged to be redundant and the building was leased to the Russian Orthodox Church who have recently completed an extensive restoration that makes the place shine and sparkle.

The original architect was Lewis Vulliamy and the church was built in 1848-49, although, the campanile was not constructed until 1860 because of monetary constraints. The interior decoration was likewise simple to severe also due to lack of funds. A major refurbishment was eventually accomplished in 1891-92 by the architect Charles Harrison Townsend. The most visible component of that work was completely redesigning and extending the main entrance façade to closely reference the twelfth-century façade of S. Zeno Maggiore in Verona, thereby enhancing the original Lombardy style of the church. 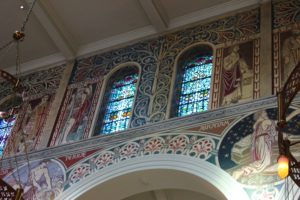 Vulliamy employed Heywood Sumner to decorate the interior of All Saints and its new west front. Sumner used sgraffito technique on the interior walls and over the front door. Sgraffito utilizes layers of colored plaster which is then “scratched” or incised with images and decorations that reveal the various layered colors. There are two main subjects of these murals, Creation to Calvary depicted in rondels flanking the arches of the side aisles. Above those, a sequence of Saints framed in rectangular pictures appears on either side of the clerestory windows. Sumner was also contracted to design a new series of stained-glass windows of which the nave windows depict a parade of decorative “tree of life” images. He also designed three more prominent windows decorating the apse of the Sanctuary that depict the Trinity. 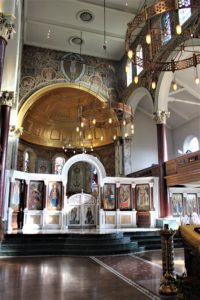 The most prominent addition to the church by the Russian Orthodox Archdiocese is the astoundingly beautiful Iconostasis or icon screen that separates the congregation in the nave from the Sanctuary where the high altar is. The Royal Gates at the center of this screen are from the old czarist embassy chapel that was dismantled following the 1917 revolution.  The Icons surrounding the Gates were painted by pupils of Russian Iconographer Leonid Ouspensky. 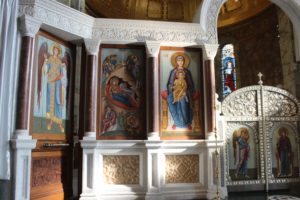 I love the central icon here where Mary and Jesus, accompanied by the ox and ass, are secreted inside a snug hillside as if planted in the bosom of the earth, the womb of safe harbor. Although perhaps not liturgically intended, to me the juxtaposition makes reference to Mary as Mother Earth. All details are more easily seen by following the link at the bottom of this post. 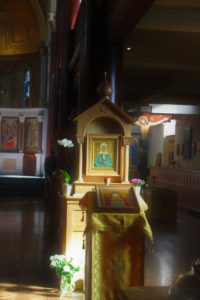 Icon shrine (ionostasia) in the nave of The Russian Orthodox Cathedral, London

To see my full photo essay of the cathedral in all its glory, enlarged and in detail, click here