“Third Stop Cordoba, All Aboard!” 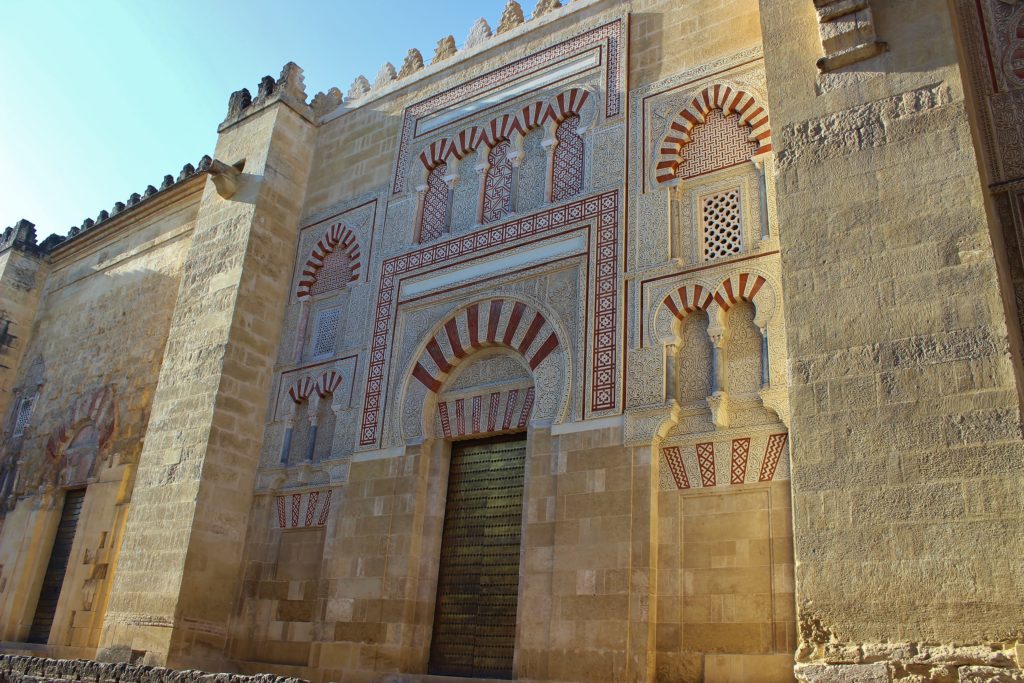 Puerta de San José, one of the nine doors in the eastern wall of the Mezquita Cathedral of Córdoba

This vast structure was begun as a mosque in 784 by Abd al-Rahman, first Emir of Córdoba and underwent four major expansions until 987 when it reached its present outward dimension.

Today the Mosque Cathedral has been extensively cleaned, restored and maintained and Puerta de San José, as seen above, is a fine example of the meticulous work being done. In the bay to the left you can see how the mark of time has deteriorated the original façade.

In 1236, King Ferdinand III of Castille reconquered Córdoba and converted the Mosque to a Roman Catholic Cathedral. In 1523 the Cathedral of the Assumption of the Virgin Mary, was constructed in the center of the old Mosque. The cathedral was in continuous construction well into the eighteenth century. 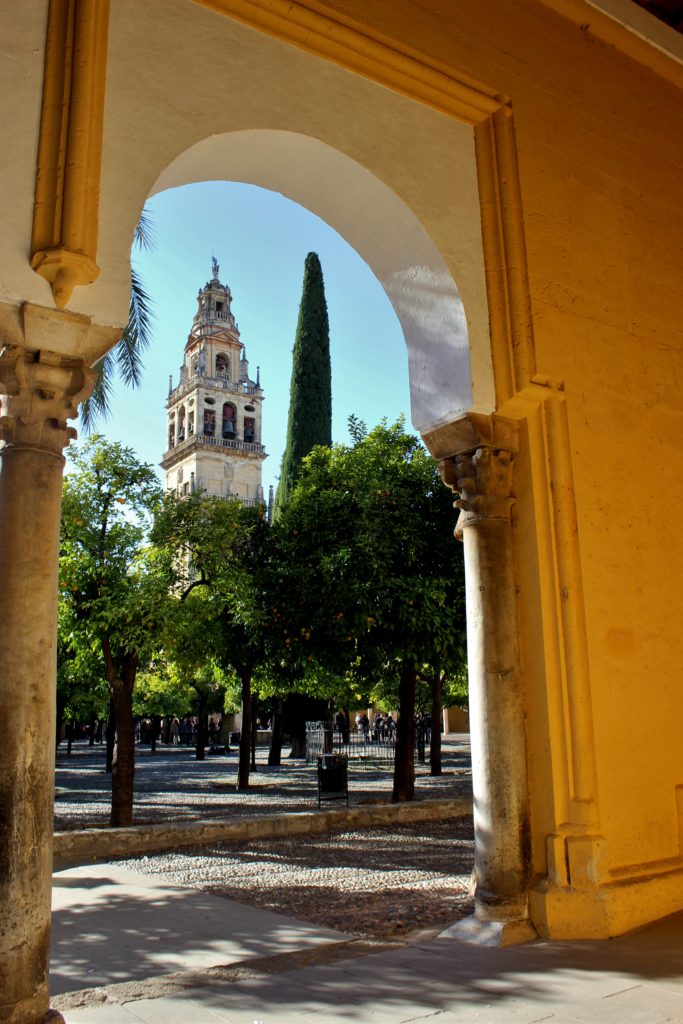 Torre del Alminar stands 305 feet high and is the bell tower of the Mosque Cathedral of Córdoba. It is in the same position and replaces the original minaret of the mosque. Here we are looking from the cloister of the eastern wall surrounding the Patio of Ablutions where the Muslin faithful cleansed themselves before entering the mosque for prayer. This is now referred to as the Patio de los Naranjos named for the orchard of orange trees neatly planted in rows. 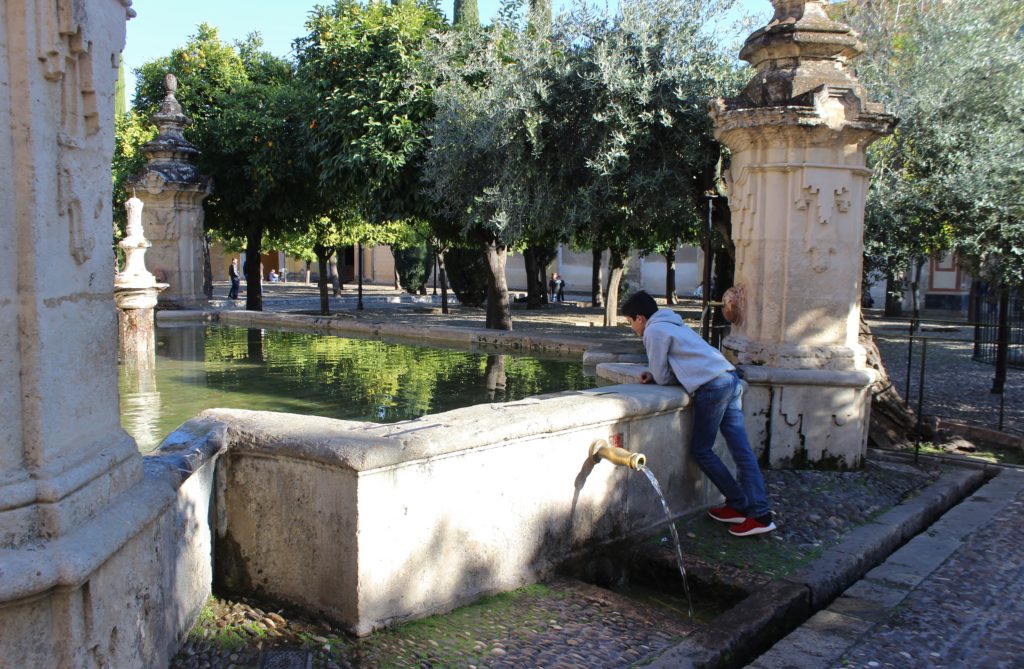 The original fountains of the Patio of Ablutions were supplied with water from wells dug into the then unpaved courtyard and from cisterns collecting rain water. These were later replaced by aqueducts bringing water from springs in the Sierra Mountains. Here we have the Fountain of the Olive and you can see behind the boy, gazing into the clear water, the silver-gray foliage of an Olive tree. 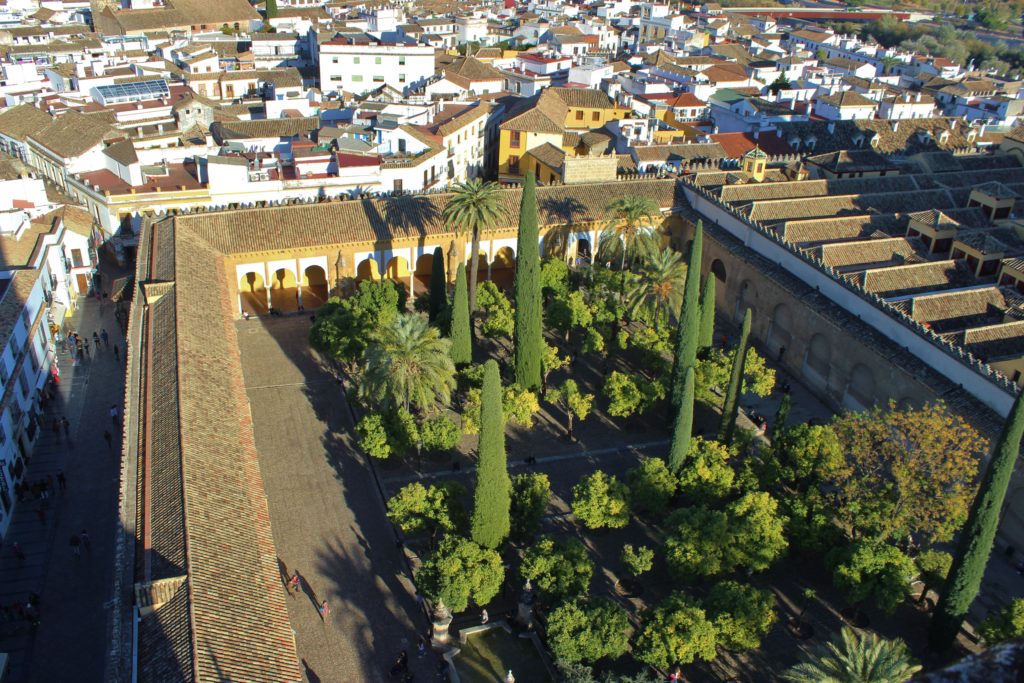 Patio de los Naranjos as seen from Torre del Alminar or bell tower. I was amazed by the good repair of the vast stretch of tiled roofs covering the cloister and original mosque of which you can only see a small section in the upper right of this photo. 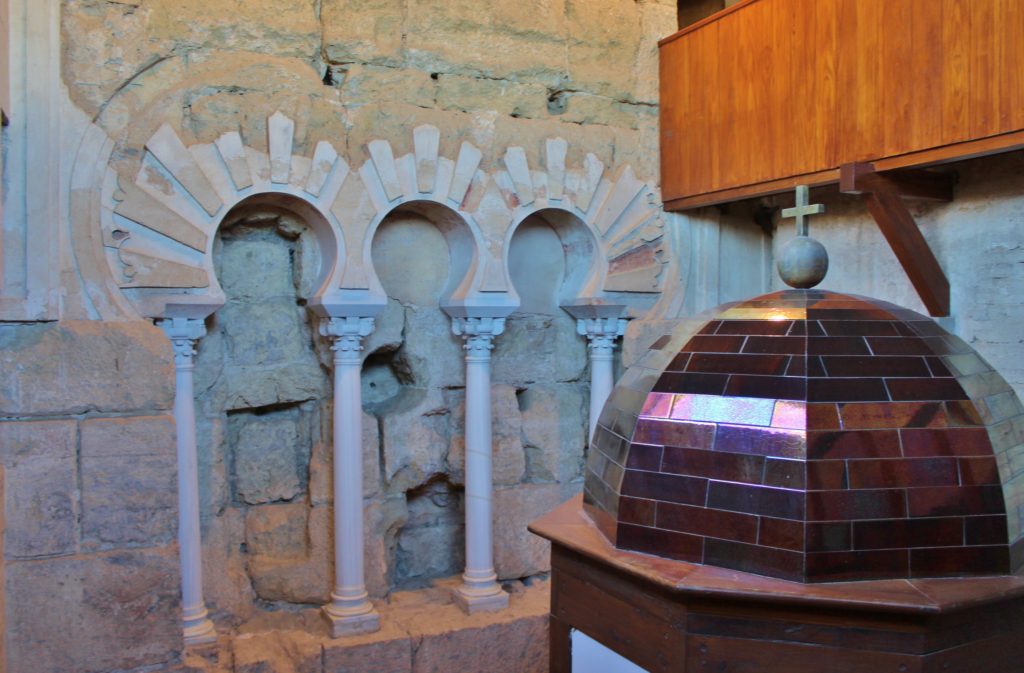 While climbing up the interior stairs of the Alminar tower one can see these horse-shoe shaped arches supported by marble pillars which are remnants of the original minaret. In the foreground iridescent tiles cover a dome over the interior entryway of the Puerta del Perdón which is one of the main entrances to the Patio de los Naranjos. 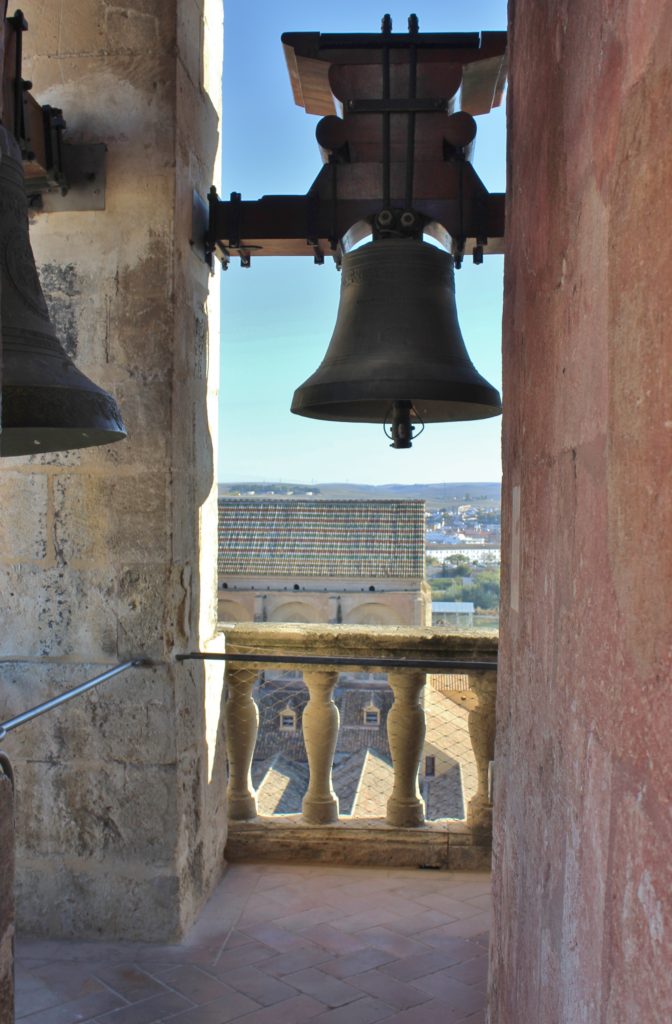 One of the old bells in the Alminar tower 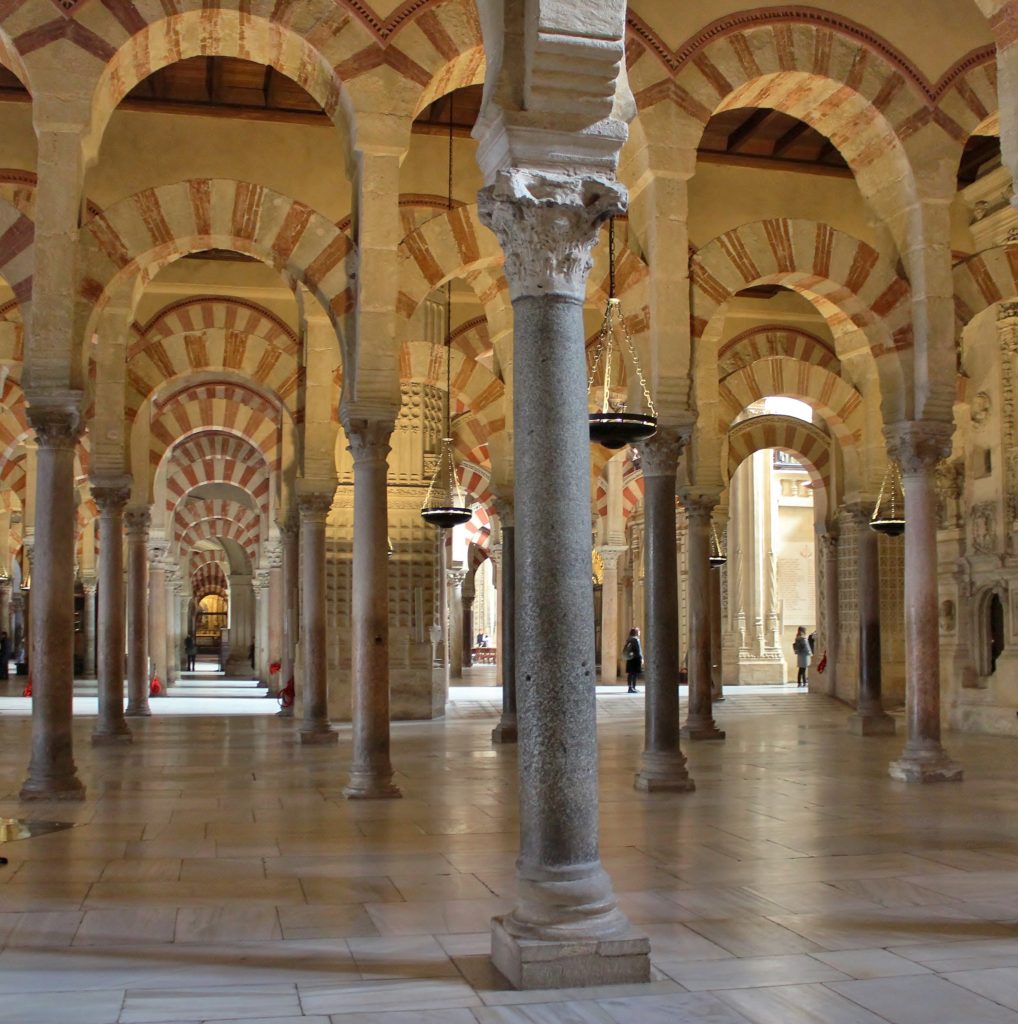 Inside the ancient mosque of Córdoba a forest of 850 pillars upholds the wooden ceiling. Some of these are reused from the original Roman temple on this sight and others were collected from the Visigothic ruins of Saint Vicente monastery that also stood here. Still other pillars were fabricated of granite, jasper, porphyry and marble for the original mosque and the several expansions over a period of 200 years. All the capitals are of different designs executed with highly refined craftsmanship.

These columns support a unique design said to have been invented here. The design consists of double arches with their distinctive poly-chrome masonry enabling the wooden ceilings to be an elegant 35 feet high. 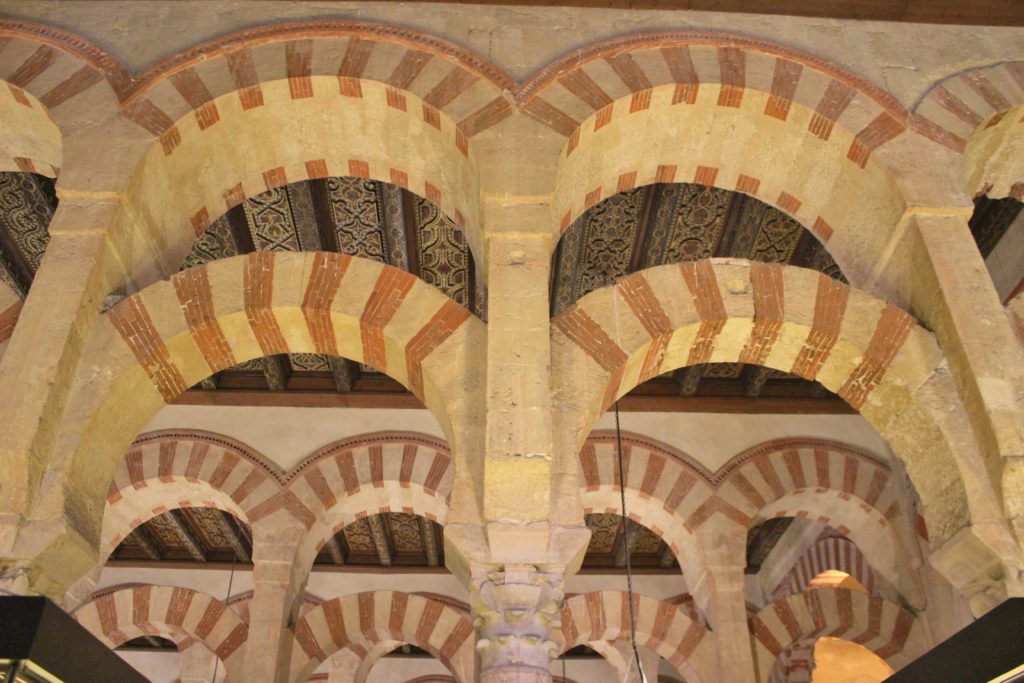 A closer view of the famous double arches of the Mosque 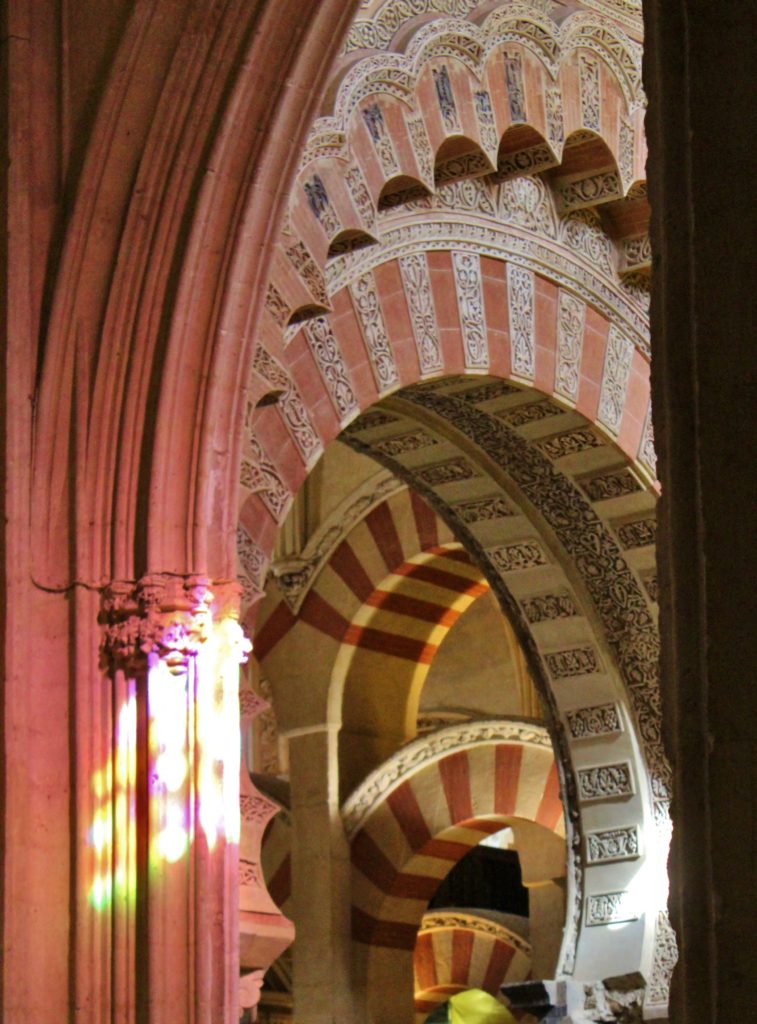 Poetry in stone tinted by the light of stained glass windows 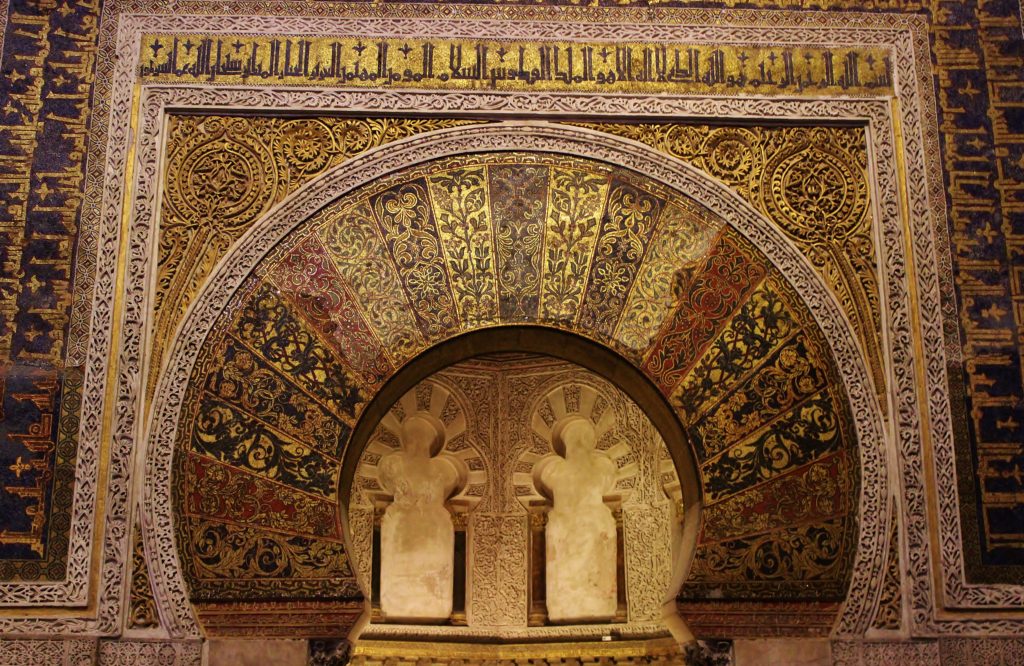 The most important arch of the Mosque marks the Mihrab, the empty niche that points toward Mecca where the faithful direct their prayers. The floral and vegetal decorations are created by tiny glass tiles backed with gold and colored pigments. They make an awe-inspiring effect of spiritual magnificence. 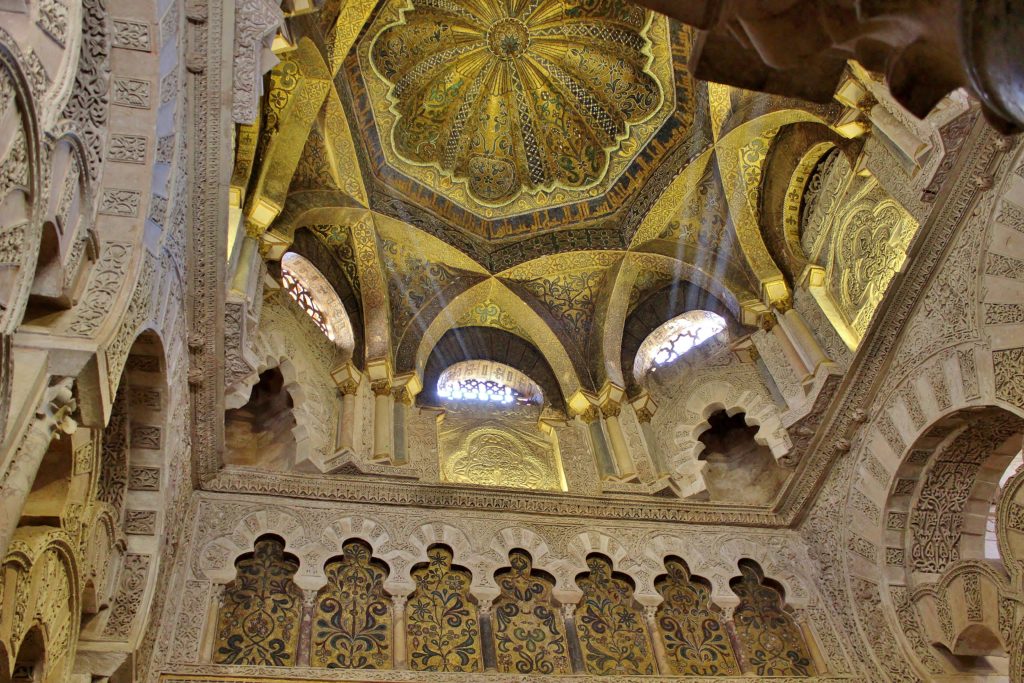 This is the ceiling dome of the Macsura, located directly in front of the Mihrab. The Macsura is where the Caliph and his court prayed. It is also covered gold mosaic decorations flowing easily over the complex scallop shapes of the dome. In my photo I was thrilled to be able to capture the “ladders” of light penetrating the stained glass windows creating an ethereal effect. 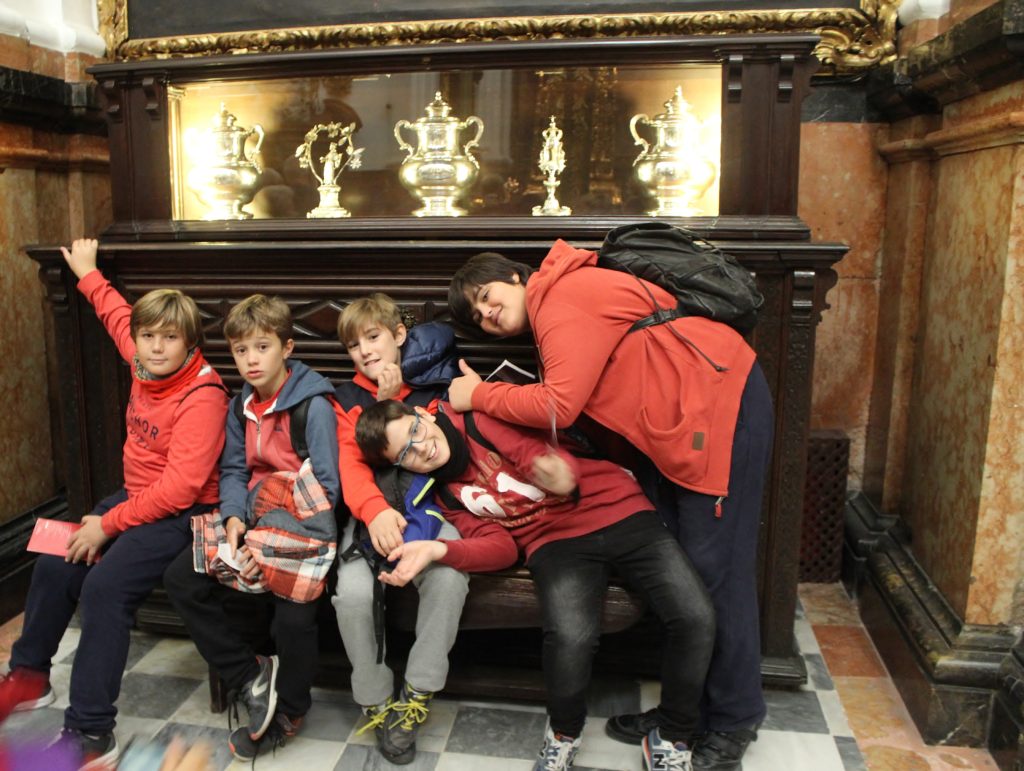 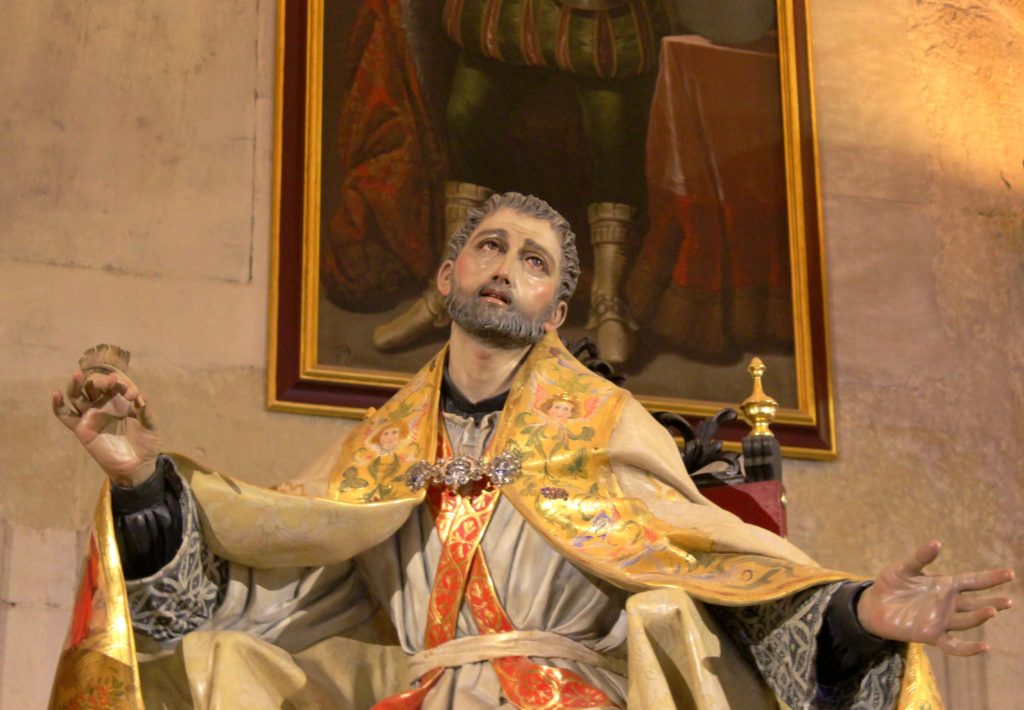 Saint Juan of Avila despairing of respect from the kids on tour or is he just flummoxed by the task of writing “Audi, filia” an ecclesiastical treatise that took him 42 years. Either way, as a writer myself, I can identify with moments of weary perplexity. 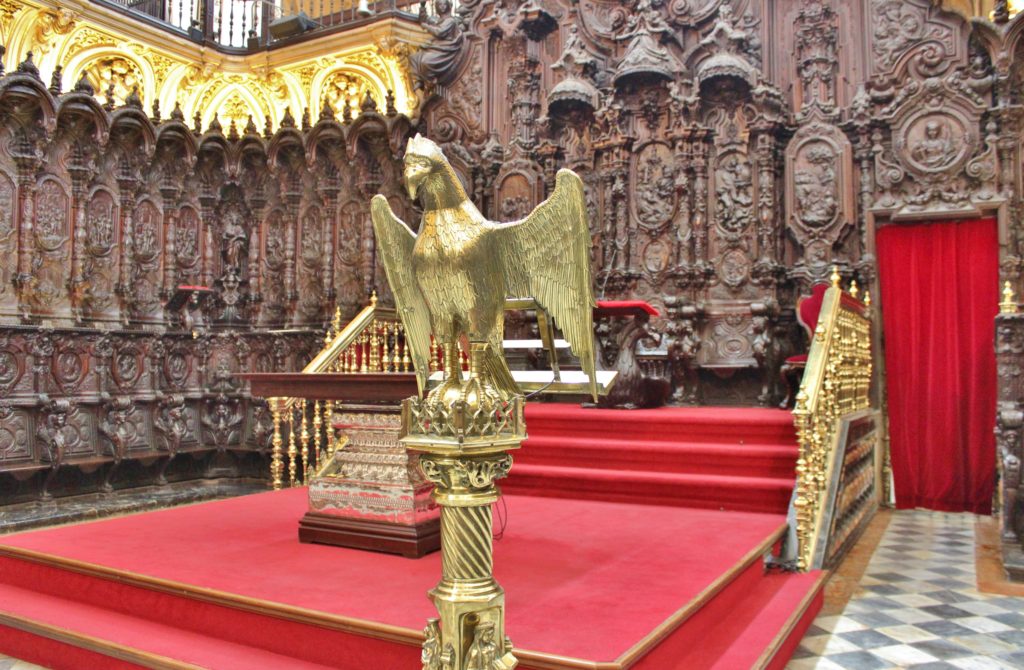 In the center of Catedral de Nuestra Señora de la Asunción (Córdoba Cathedral) is this magnificent Choir, all carved from Antilles mahogany. It was conceived and created by Pedro Duque Cornejo y Roldán, the most prolific sculptor of the 18th century in Spain. Begun in 1748 he worked on it until his death in 1757 when his sons and select pupils completed the work in 1758. It seems like lightning speed to me considering it is composed of 109 stalls with a blowout Bishop’s Cathedra flanked by additional thrones on either side which you can glimpse behind the shining brass eagle pulpit. 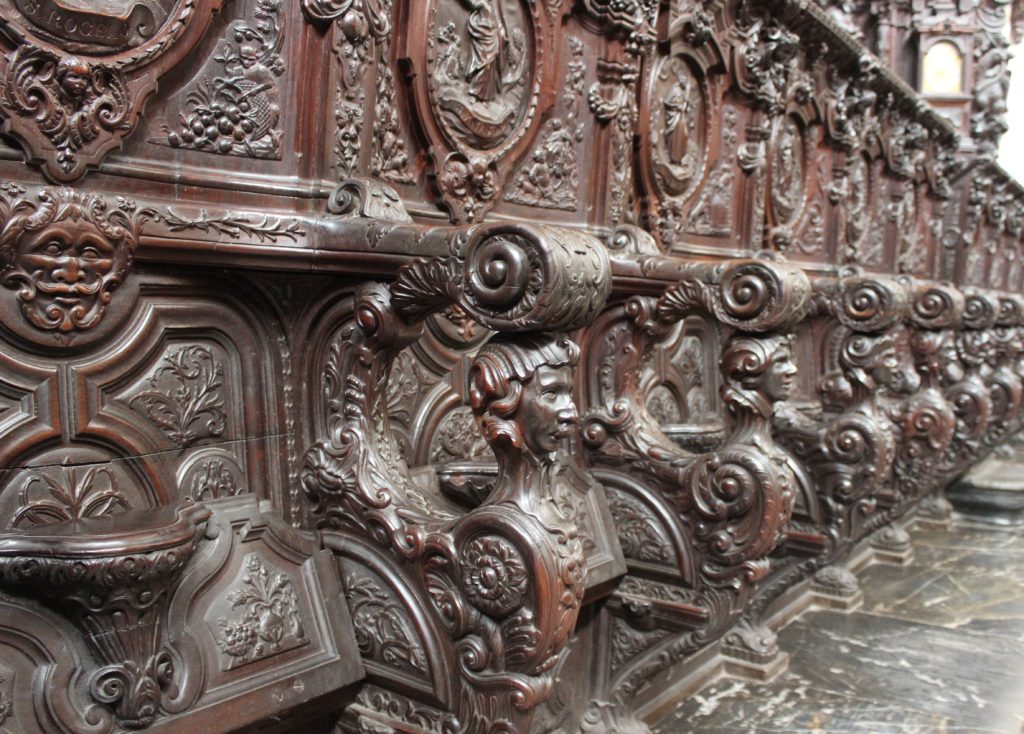 Details of the lineup of choir stalls on one part of one half of the Choir of Catedral de Nuestra Señora de la Asunción. The whole ensemble is of staggering complexity, superb artistry and wild extravagance, just my kind of thing! 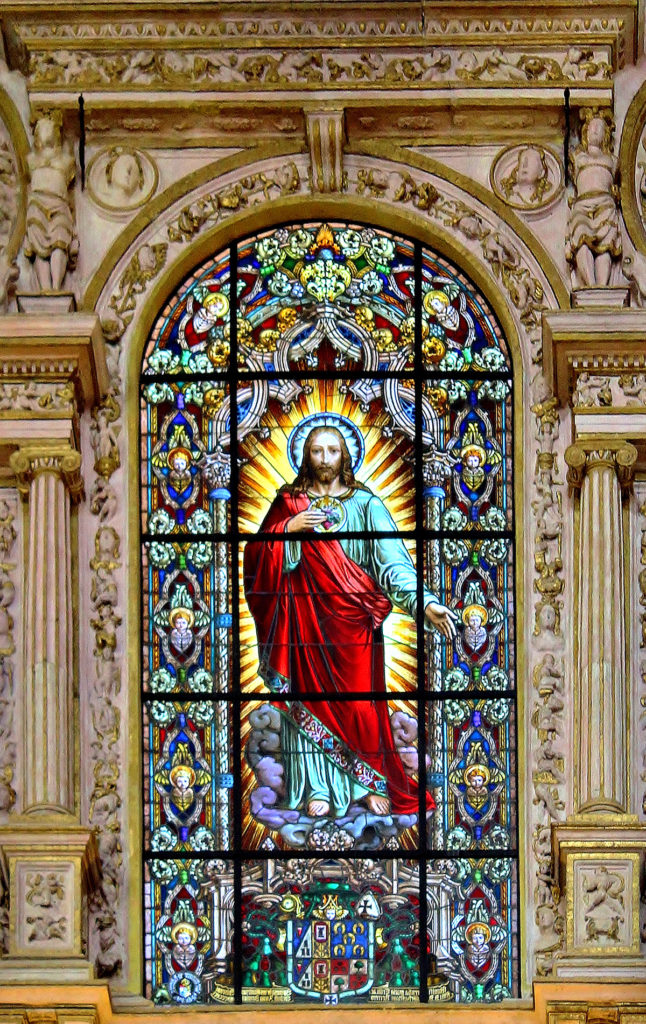 Christ in glory, the point of it all. For me this depiction of the final evolution of Jesus is the important message of Christianity, revelation of the divine as radiantly beautiful.