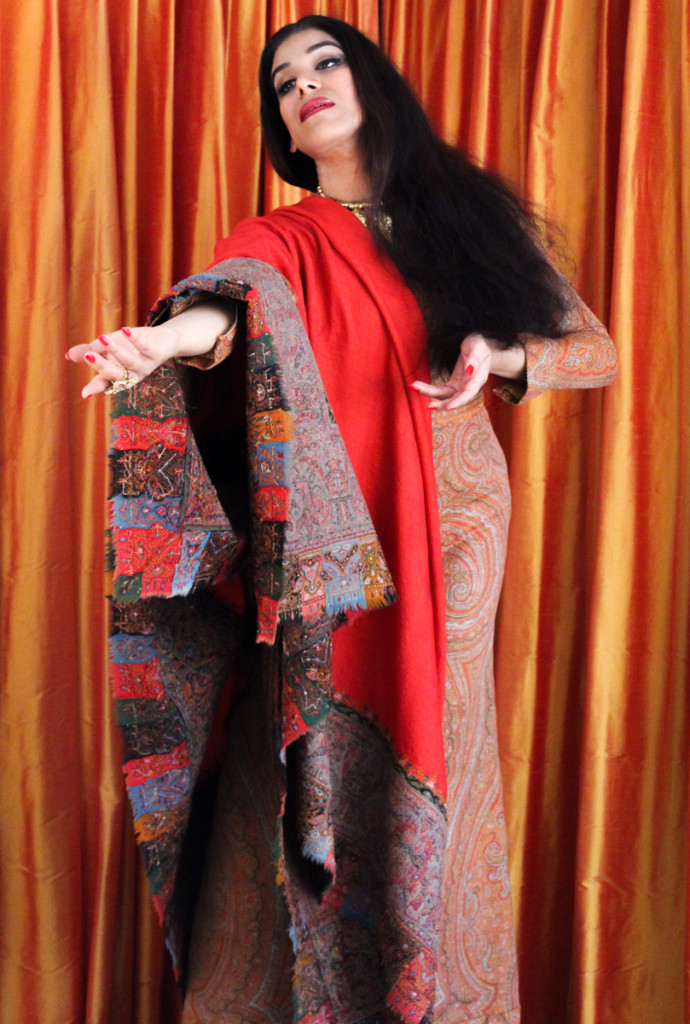 I first caught sight of Mesma Belsaré dressed in a formal black silk sari with a voluptuous peony tucked into the complex waves of her blue black hair. She was regally ensconced in a bicycle rickshaw enlivened with rainbow colors and sparkling sequins that was being propelled at a dignified pace by a sexy young driver. They were leading the MASALA (Massachusetts  South Asian Lambda Association) in the Boston Gay Pride Parade of 2009. Mesma gracefully held aloft a golden silk parasol protecting her flawless complexion from the brilliant morning sun, creating a nimbus that accentuated the modesty of her costume while she surveyed the carnival crowds gathering around her with an air of bemused delight. She was surrounded by a quartet of handsome near – naked Asian men joyfully celebrating the pride of being young and beautiful with an enthusiasm that Gay People around the world have special capacity for. Needless to say, I was captivated by Mesma immediately. Sometime later I had the privilege to come to know her as a consummate Bharatanatyam dancer of classical Indian tradition and dear friend. 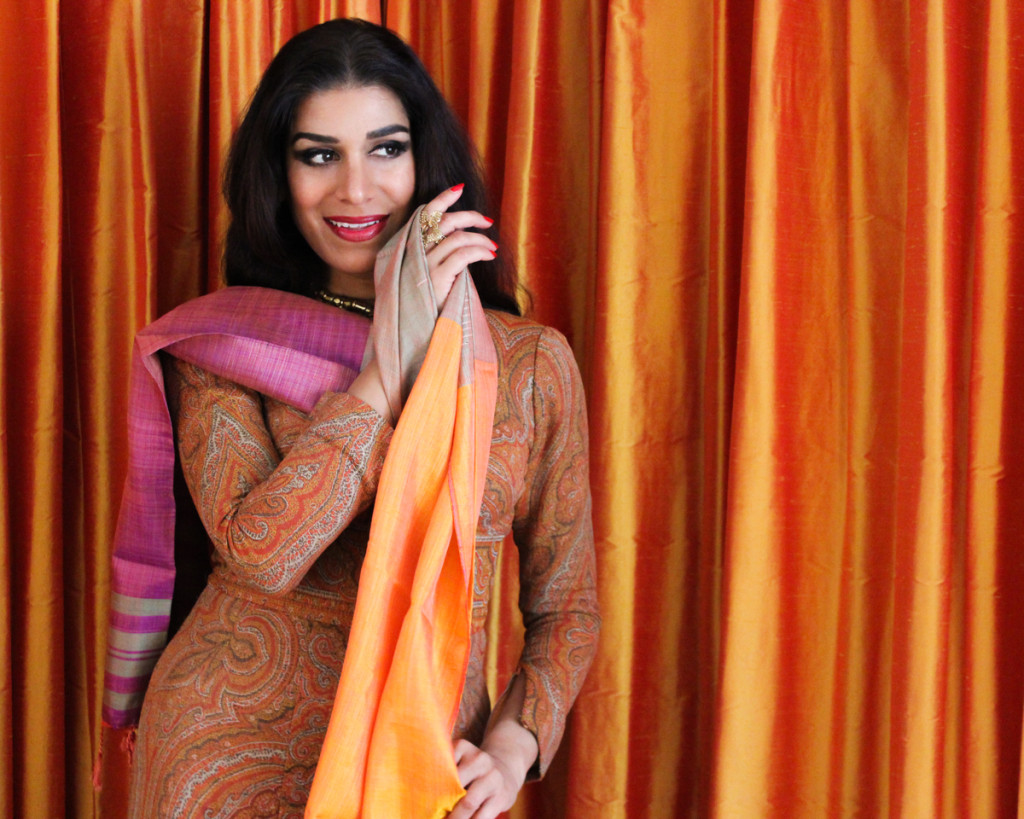 The second time I came across Mesma was in Gloucester, Massachusetts at one of the History Project’s events (LGBT history archive in Boston.) She arrived in the soft light of dusk in a polished Lincoln Town Car in the company of an Armani clad group of escorts who all joined the party for dinner at one of those marvelous restaurants perched on an old pier stretching out into the Gloucester Harbor where the lights of a myriad bobbing boats reflected off the darkened water onto the ceiling of the candlelit restaurant. These sparkling emanations hovered above our company like fairy sprites eavesdropping on the festive conversation and adding a twinkle to Mesma’s eyes. On this occasion she wore a simple black cocktail dress that clung to the sexy curves of her lithe dancers’ body. 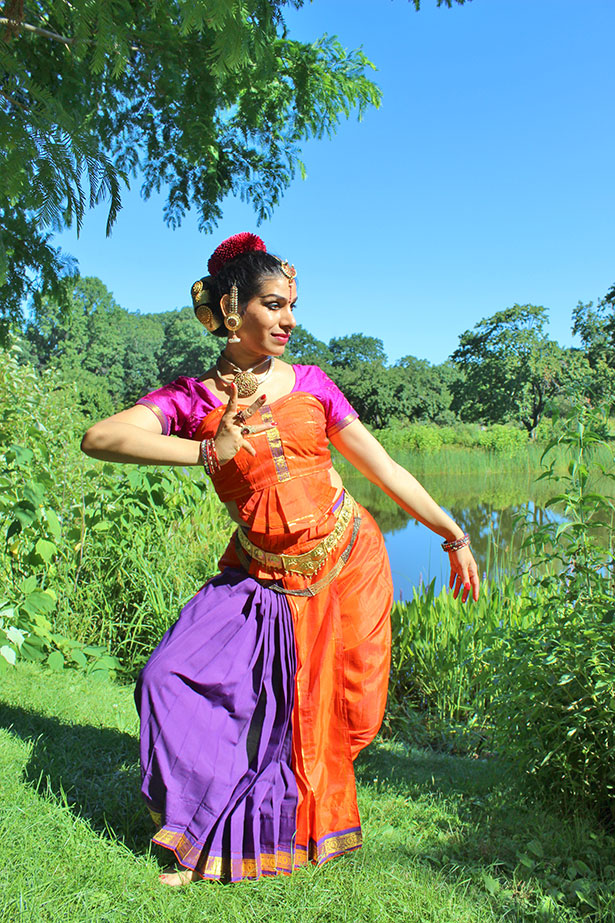 One of the first dance performances of Mesma’s that I attended was at Wellesley College in the Houghton Memorial Chapel on campus. Mesma emerged from the shadows of the neo gothic paneling above which fading visions of a host of angels glowed from scintillating stained glass windows. Mesma is a storytelling dramatic actress in her dance. Her presence on stage demands your attention as if invisible threads were reaching out and taking hold of your psyche. One is compelled to follow her complex rhythmic movements that incorporate percussive foot work enlivened with anklets of shimmering bells that, like the racing pulse of a leaping gazelle, set your soul on fire. Mesma is capable of a vast and subtle array of emotional dynamics that animate the stories she is recounting. Her arms and especially her hands and eye movements articulate ancient sagas of love and loss, spiritual evolution, triumph and tragedy that come to us through her dance that reaches back in time to the pre-Vedic experiences of the Gods. Quite simply, Mesma is a vessel through which the essence of life experience pours by way of the exquisite art of Bharatanatyam! 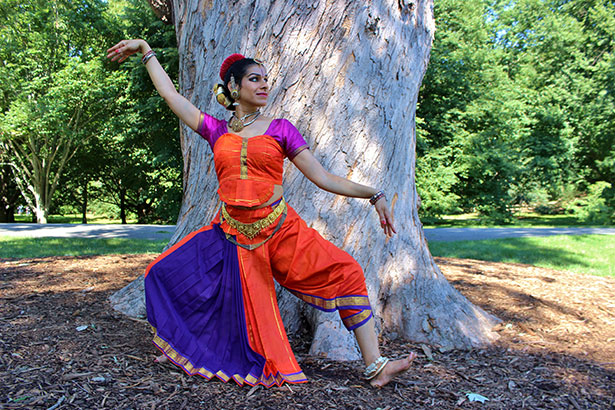 Iory: What is your cultural identity?

Iory: What brought you to the USA?

Iory: What is the name of the dance you practice?

Iory: Is that dance form popular in India and around the world now?

Mesma: Ever since I was born. Dance is a fundamental expression of the living. As long as one is alive, one is dancing. My formal training began when I was 7, which continued for the next 15 years or so.

Mesma: Bharatanatyam is one of the 9 classical dance styles in India. It has a long and complex history. Some attribute its origin to the Natyashastra, a treatise on dramaturgy dating back to the 2nd century B.C.E. While the guidelines of stagecraft and technical knowhow may be credited to a treatise, the art form no doubt is a living, breathing entity and has evolved through a history of bardic storytelling, temple rituals and refinement in royal courts. It is inextricably connected to the practices designed to propitiate the temple deities and / or the patron kings. Sadir, as it was called before being renamed Bharatanatyam, was the sole domain of the Devadasis, communities of women who were guardians of propitiating temple and court rituals in both pre-colonial and colonial India. When the Devadasi practice was declared illegal in 1947 (ironically and merely two months after India’s political independence from the British), women from non-Devadasi communities took to it and the form inevitably and dramatically underwent a transformation. The rest is history. 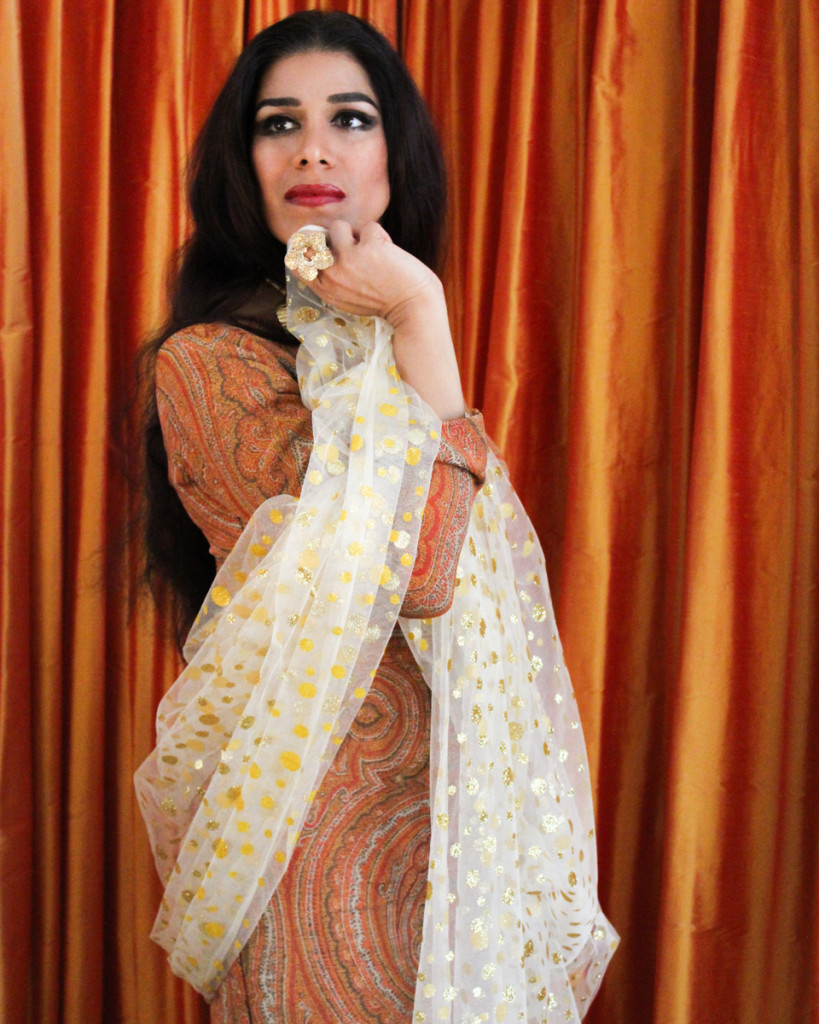 Mesma: Every act in life is a performance. One enjoys performing as long as one is ‘alive’ and not just surviving. On a given day when one doesn’t feel alive, dance becomes a mechanical exercise. Either way dance demands that we submit to its discipline, whether one enjoys it or not.

Iory: Is there a “Life Lesson” in art and especially your dance?

Mesma: Dance is Life for me. One doesn’t live it to learn lessons, but simply because one must. There are no alternatives. Dance has given me the tools of looking inward, so the external world doesn’t tip the equilibrium.

Iory: Are you ever satisfied with a performance?

Mesma: No. Never. It is the striving that keeps me going.

Mesma: I came to the US to study art education. Given my passion for painting (which puts me in a completely different frame of mind than dance.)  I simply wanted to explore another avenue. Currently I am at the Massachusetts College of Art and Design’s Bakalar & Paine Galleries of Contemporary Art in Boston, MA. 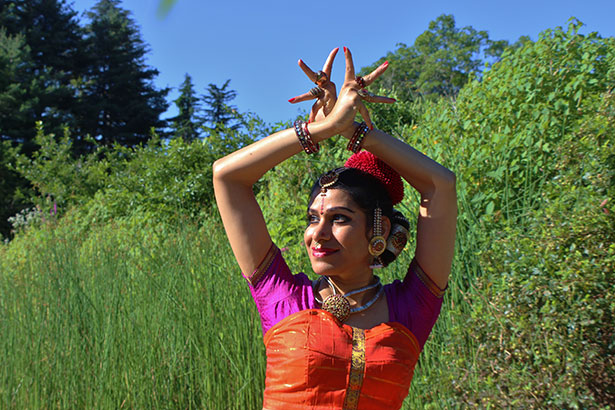 Mesma: I am blessed to have had a loving family, mentors, friends and an appetite for learning. A simple sunrise or a flower can fill one with the wonder of nature’s miracle at work. No artistic masterpiece or scientific invention or discovery would have been possible without this singular curiosity with which human beings are blessed. I strive to be receptive to the magic that we call life. It is not for me to understand it, but I live for the moments when one can transcend the cerebral to the experiential. Dance and Painting are my two doorways to experience and appreciate what you call “life’s drama.” 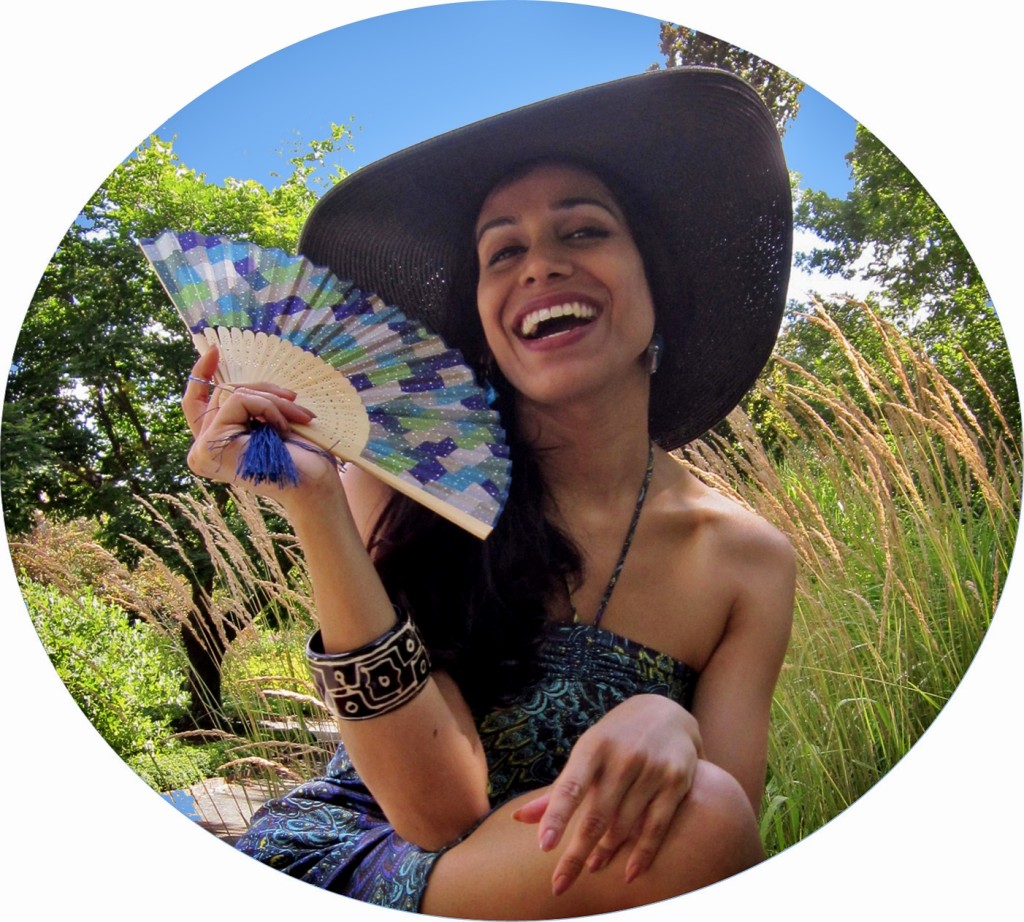 Trained in classical Bharatanatyam by Sri Shankar Hombal and Padmashri Geeta Chandran in India, Mesma Belsaré is continuing her studies under Dr. Maya Kulkarni in New York City. Mesma is a recipient of the Cambridge Arts Council’s Artist-Grant and the Government of India scholarship for advanced training in Bharatanatyam and Indian classical music. Her professional dancing career includes solo performances at the Lincoln Center (NYC), Asia Society (NYC), Alvin Ailey Theater (NYC), The Lincoln Theater (Washington D.C.), Siri Fort and Triveni (New Delhi) and the Harbourfront Centre (Toronto) among other venues. She was twice nominated for the Brother Thomas Fellowship by The Boston Foundation and for the Dora Mavor Moore Award by the Toronto Alliance for the Performing Arts.
Mesma is also a Museum Educator and had been for a number of years the Curator of Education at the Boston’s Massachusetts College of Art and Design’s “largest free space for contemporary art in New England”.