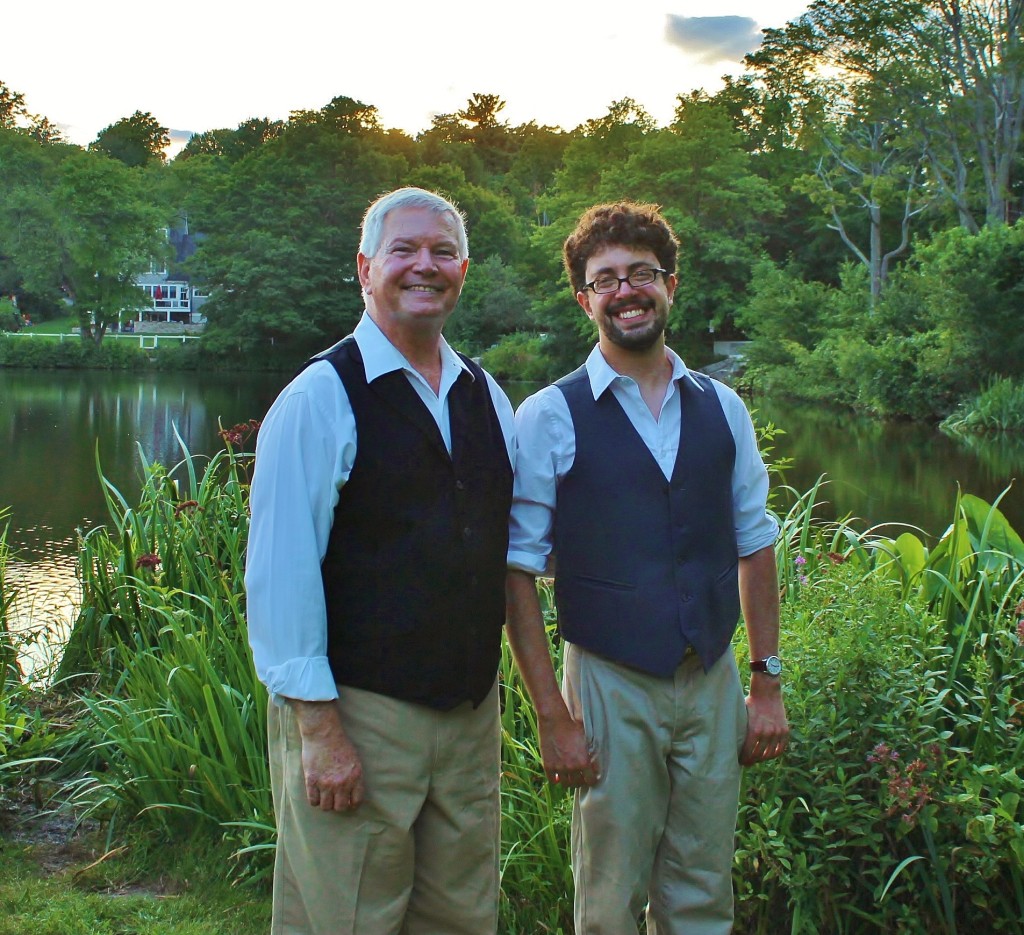 My friends David Stockton and Andy Carrera were married at Bullough Pond, Newton on Saturday August 27th 2016 and here is the happy couple now. David is on the left; Andy is the cutie with the curls. They chose this charming spot because it is where they spent quiet times together during a gentle courtship which culminated in Andy popping the big question to David, “will you be mine?” After serious ruminations David, being a smart fellow, saw Andy as the apple of his eye, and what’s not to love ‘bout this gorgeous hunk? Sooo David sensibly replied, “Yes!”

I have shamelessly made up their dialogue but the obvious truth of these two worthies is they are deeply in love and being with them on their big day was meltingly beautiful for all the assembled wedding party! 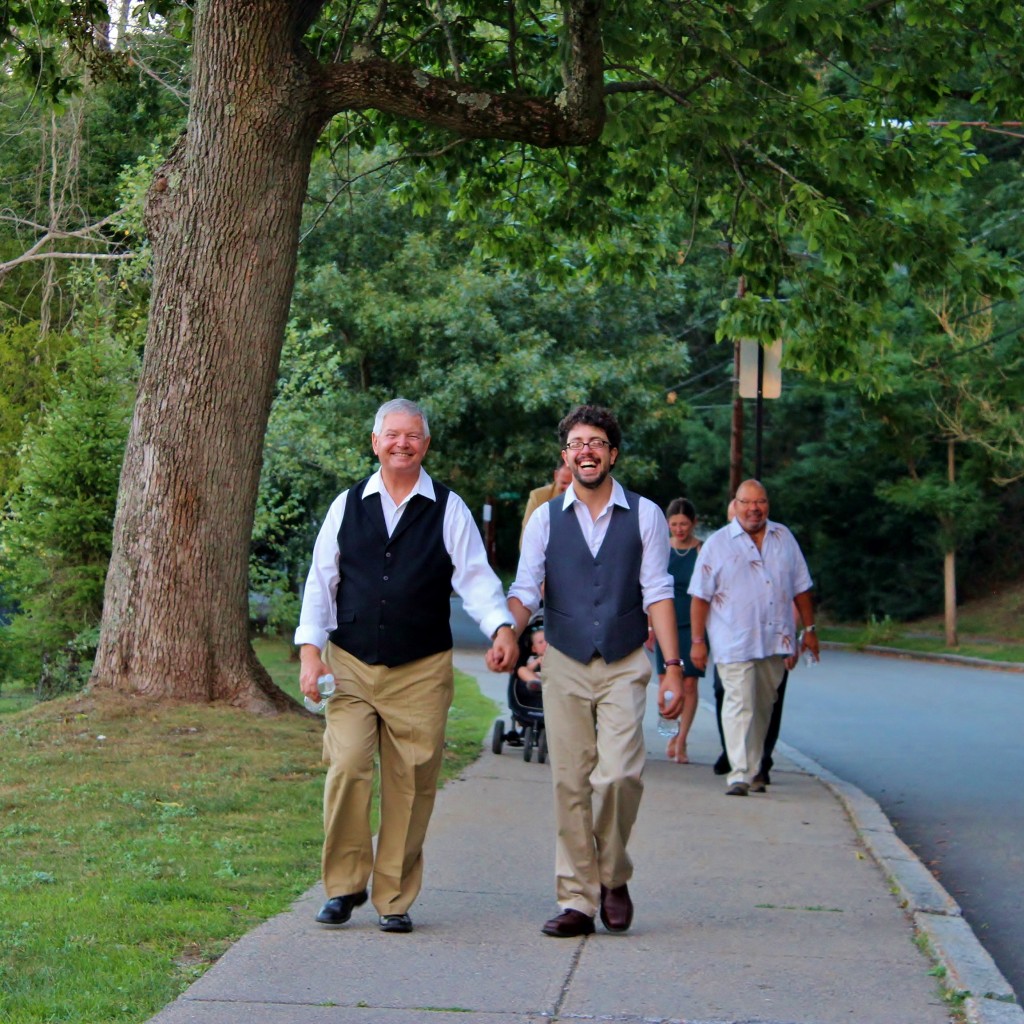 We all assembled at Saint John’s Episcopal Church and after a while, on cue from Maestro Stockton, we proceeded on a leisurely stroll to the near-by Bullough Pond. This was an innovative and effective way for the guests to get to know one another better and enjoy the late summer afternoon in the neighborhood where Andy grew up. 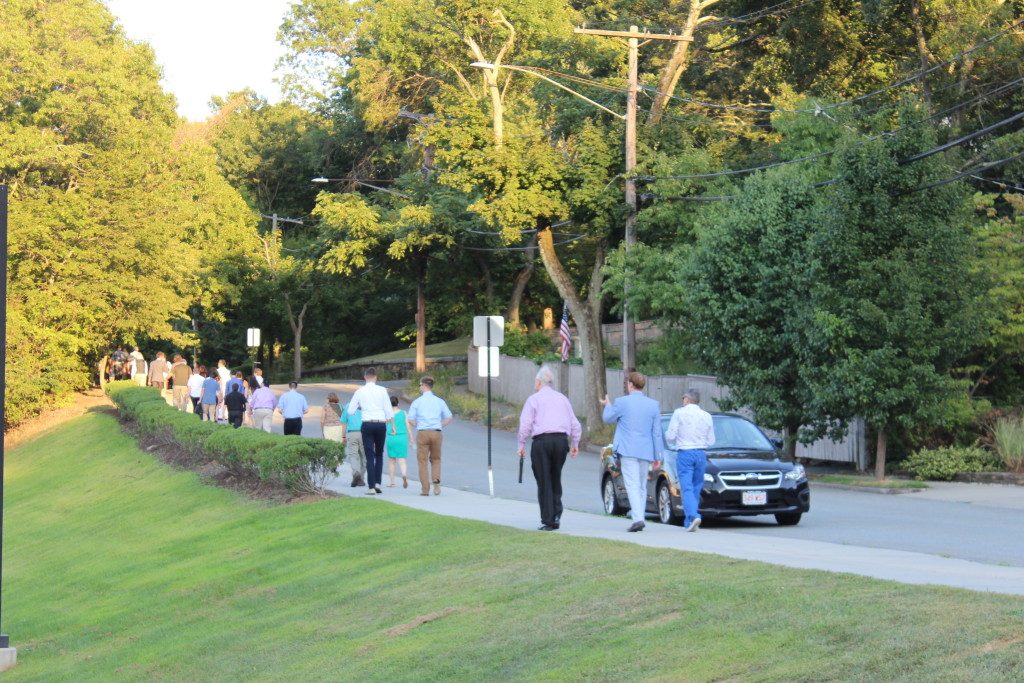 Andy is in nursing school at MGH School of Professions, studying to be a Pediatric Nurse Practitioner under the auspices of The United States Air Force with a rank of Second Lieutenant. He is diligently absorbed in deep study working toward his graduation on May 6th, 2017. David earned his Master’s Of Music degree from The New England Conservatory, a Doctoral degree of Music, Orchestral conducting and opera from The University of Miami and that’s only the beginning of his accomplishments. Locally we all remember David’s brilliant decades as Conductor of the Boston Concert Opera. 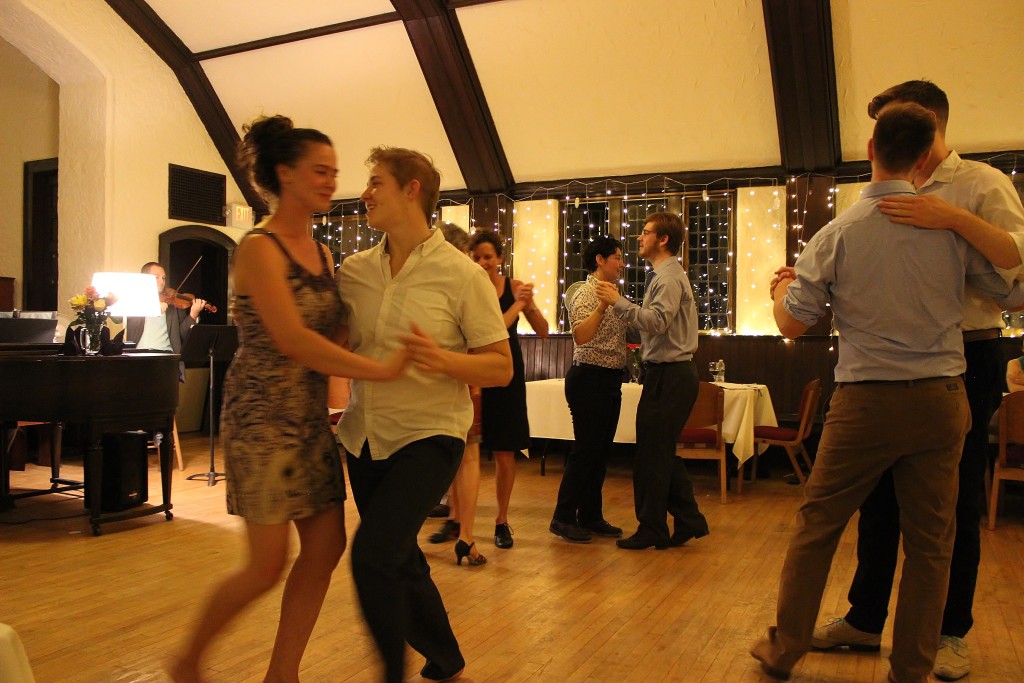 Andy and David have diverse interests one of which is Queer Tango Dancing at the Democracy Center in Harvard Square taught by their friend Lucas. The whole program is described as gender flexible, a new term to me, and like the proverbial duck to water I am quacking along with that lingo! One of the happy results of the Love Doves activities on the dance floor was that the wedding party included a buncha sexy, passionate dancers who let loose with sultry moves accompanied by Farley Masterton, on the violin and Brian Patton on the piano. 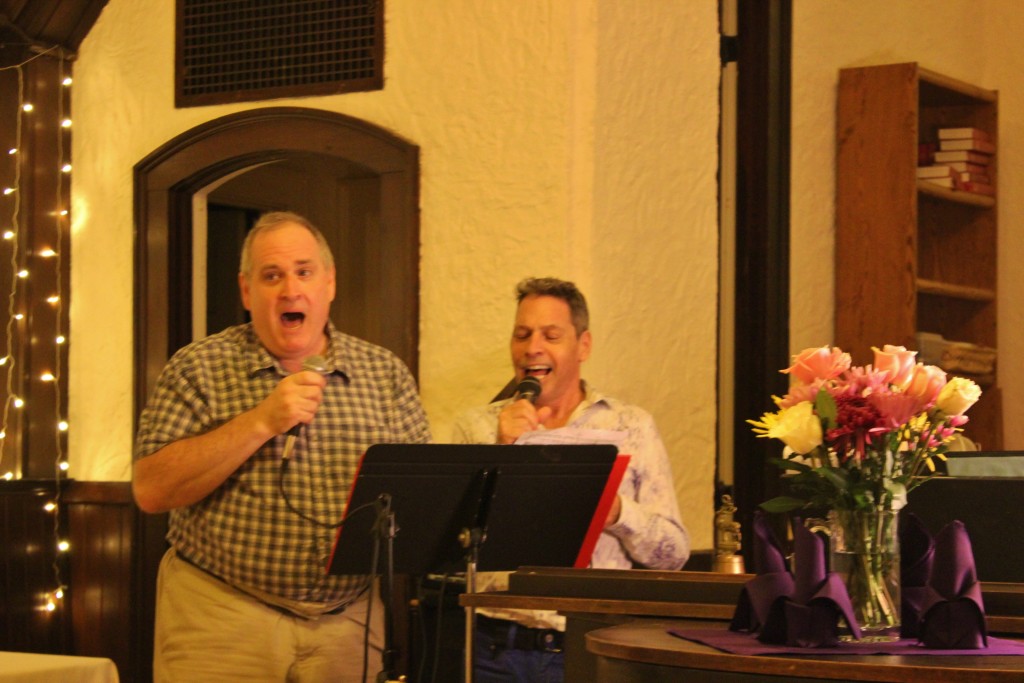 David is an active member of the Boston Gay Men’s Chorus and not surprisingly with his music background the party was larded with another buncha hams who let loose with some scintillating solo performances that fairly rocked the roof and plucked all our heart strings.  And remember David’s background is in Opera! Sooo he could not possibly let well enough alone and produced a beautifully printed song book running the gambit from, “Put on a Happy Face” to the infamous, “YMCA” yes of “Village People” fame. We were all expected to sing along and boy did we! Again the roof went pitter pat, big time. 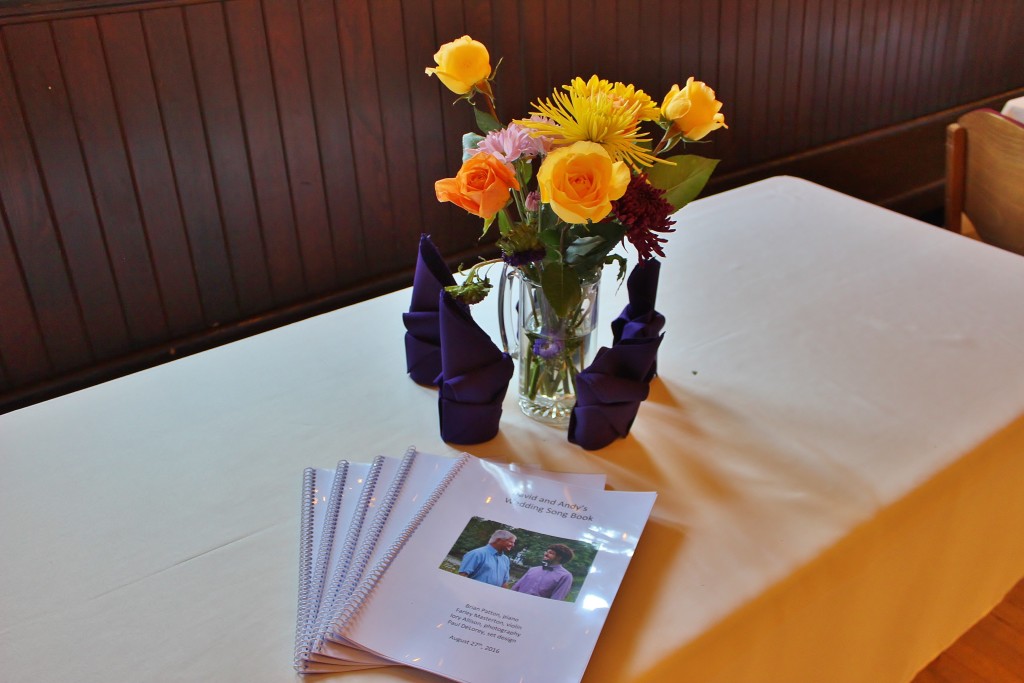 The food, bar and decorations were under the competent management of Paul DeLorey and Paul keep a constantly flowing buffet rolling along with wine bar and pizza provided by Bartuchi’s all culminated with the sweetest of wedding cakes that again melted everyone’s heart and put a big smile on our faces. 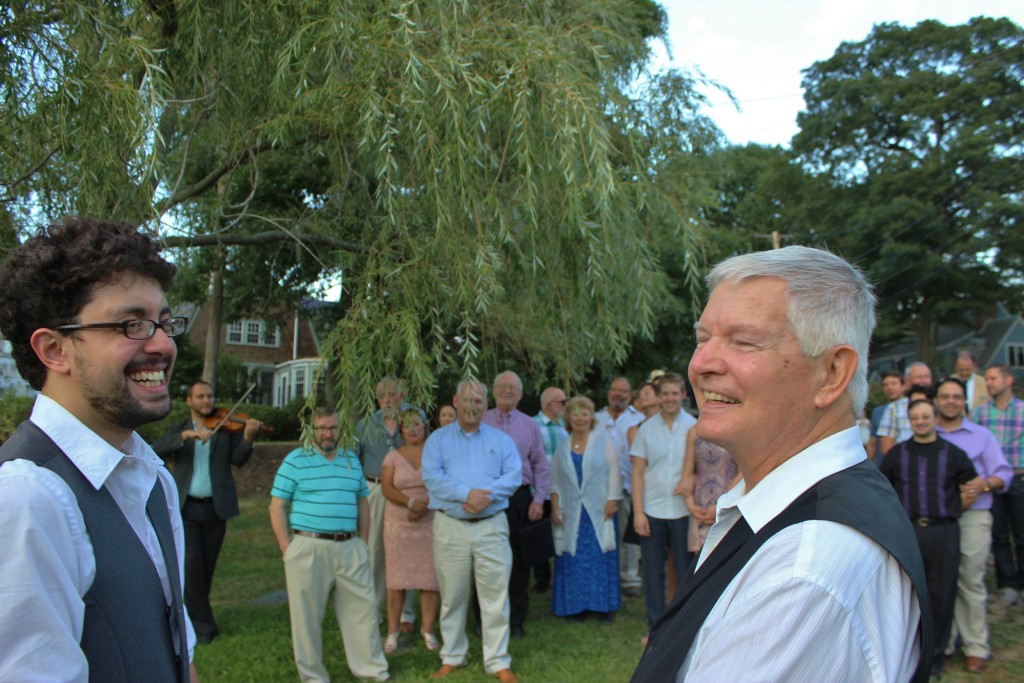